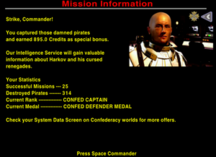 It's a multi-mission-pack and there is a ranking system, some special missions and a bonus system integrated.

Difficulty is easy for the first few missions, but it's getting harder if you succeed. You will need a well suited ship to accomplish all missions. So any extra equipment is welcome. And don't forget to use your weapon arsenal. You will need it.

Since the battle against the Thargoids hundreds of GalCop pilots have lost their lives in this merciless fights. And the lost souls are a burden for all commandeering officers. Some of them can stand the pain, some were going crazy about the blood and the cries. And some of them...


Only a strong alliance of all GalCop worlds could support the navy to meet this threat. But not all worlds are willing to do this. GalCop worlds are in need of skilled pilots to support the local police to protect their trade routes against all kinds of piracy. In this case confederacy planets have now got some trouble with an ex-general and his pirate group. General Harkov's group seems to be well equipped and even better informed. Your mission is to support the local police to find, destroy and capture Harkov and his group.

Welcome Commander. I'm Major Hurst, your leading officer for the next weeks.

Commander. In last days we've had some trouble out there. Traders have been kidnapped or killed and a lot of people are worrying about security problems in our systems. The Galactic Cooperation has founded a special squad to ensure that the political stability won't be harmed anymore and the high council has modified the Penal Code. But we still need experienced pilots to meet this threat.

If you'd accept this offer you will become a member of the GCI Special Operation Squad 'Harkov', named after an Ex-General who has changed sides and you'll get the chance to show your skills. It is dangerous, believe me, but we are the last barrier before systems will fall into total anarchy. Harkov is our 'Enemy #1', well equipped, highly intelligent and has good contacts mostly to Confederacy Systems and their political leaders. So we are expecting (and the last days have already shown) that Harkov's gang is present in these systems. We need more information about Harkov, his gang and his plans and it will be your job to bring in some of his pilots. Alive!

You'll meet a lot of new ship types out there. The Galactic Cooperation has started a test program for new fighters and carriers and you'll visit places that are usually not meant for public eyes. I can't tell you more, your security ranking is not high enough, but this will change some day - if you'll join. But GCI is not only there to fight against piracy. In Harkov's case our secondary goal is to find out more about his relationships to politicians and navy officers.

We know that politics is sometimes dirty business and the President of the Galactic Cooperation has authorized GCI to investigate in some special affairs related to district governors. But better forget this business - better for you. It won't be your task.

We'll stay in touch, so be prepared for some holiday trips.

Hurst, over and out.

This mission pack is placed in the first five galaxies on all high-tech confederacy worlds. Harkov knows where the honeypods are.

This OXP is currently broken, i.e. it does not work with the current release of Oolite. Reason: This oxp was broken with the changes made to Oolite v.1.72.

This OXP can still be downloaded from the following links:

There might be other relevant stuff in his Github or his box account. There are some interesting remarks tucked away inside this OXP - but they date back to 2008!

Depending on what you read in the oxp, it was either to be the first of a trilogy - or to be a generic mission-maker (like GalCop Missions?). It was planned (much later) to be rescripted as an AddOn for the Vector OXP, but do not hold your breath. Especially since it looks as though the author has died.

One presumes that some of the extra gubbins put into Library.oxp (rank badges, etc) was done with this OXP in mind.