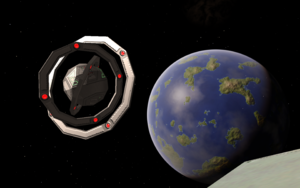 KillerWolf's SoThis buoy is a thing of beauty

Sothis.oxp by itself provides a secondary station at most systems, usually on the witchpoint side of the main planet. There is the rather impressive station - and also a rather natty buoy. It was designed by KillerWolf in 2010.

Sothis was the name of an ancient Egyptian goddess (KillerWolf's Nuit, Nephthys & Hathor stations are also named after Egyptian goddesses). Sopdet, known to the Greeks as Sothis, was an important goddess of the annual flood and a psychopomp guiding deceased pharaohs through the Egyptian underworld. She was also identified with the star Sirius, which was important in recording the flooding of the Nile. She ended up becoming an aspect of Isis.

Isis Interstellar is proud to announce the launch of their new Sothis space station.

Following the critical acclaim and success of the Nuit station, Isis Interstellar began looking into a follow-up project. Although feedback on the Nuit was generally favourable, it was noted in many reports that the station was overly large for several potential customers, especially since the long docking struts were not being used. To this end, Isis Interstellar decided to come up with a compact design of comparable size to a standard Coriolis station. A research & development phase was followed by an intense construction and testing phase at the Faukenhewj Shipyards, and a working prototype, including a new navigational buoy, was produced in surprisingly short order. The resulting Sothis station has been a major hit with both corporations wanting a modern headquarters, and individuals wanting a status symbol.

The Sothis is extremely high tech, and have full shipyard and trading systems fitted as standard. Beyond that, the interior is fully customisable to the customer's requirements. So far, Isis Interstellar has provided Sothis stations as corporate offices, a six-star hotel, a huge orbital shopping mall, as well as numerous high class luxury accommodations for the rich and famous. Sothis stations are fitted with their own beacon, and appear as "$" on an Advance Space Compass.

Over the past year the Sothis project has been very rewarding for both Isis Interstellar and surrounding communities, as over two thousand construction, design and testing jobs were created by Isis Interstellar. Demand for the stations remains high, and they are becoming a more and more common sight in systems. Due to our ties to the Navy, Isis Interstellar has been in talks to look into the possibility of creating an armed and armoured version of the station for deployment in Witchspace, to provide the Navy with both much needed medical facilities and a Witchspace FARP.

Install the OXP by placing Sothis.oxp in your AddOns-folder (See OXP if you need to know where to look)

This has to be the Rolls Royce of orbital space stations, with customised interiors, a reading room with a wide selection of inter-galactic news items on offer, specially tailored markets and a flavour all of its own (comments apply to the version which you have tweaked yourself...!).

SothisTC.oxp (by Spara) modifies the Sothis.oxp (by KillerWolf): All Sothis stations are now converted into trading stations and relocated to high TL corporate systems.

If you have New Cargoes OXP by Cim installed, you can read TradeNet for free when visiting a Sothis station. You will also find that there are more special cargo opportunities than there are in the main orbital station.

There are also some rather natty screen-shots of maps of the galactic trade routes to adorn your screens!

The 2013 version of SothisTC does not allow game saving, the New Cargoes facility does not work, nor does it appear in the Market Inquirer database unless one is docked there. The 2021 tweaking thread addresses these issues, and modifies the regular F8 markets too! 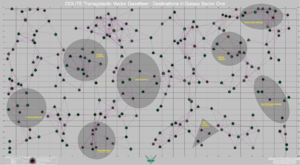 Long ago a business magnate Doonald Troomp placed Sothis stations in high tech corporate systems to act as trade centers. To the public at large Troomp is better remembered by his intergalactic competition, which he called "The Apprentice." The idea was to find the most suitable person to run one of his companies. Mr Troomp is long gone, but his Sothis Trade Centers are live and kicking.

Spara's original version also linked in with his Market Observer oxp and was titled Troomp.oxp! As time went on, and Mr Troomp became more and more controversial, that OXP was split, Troomp consigned to oblivion and Market Observer reclaimed from the wreckage.

Install the OXP by copying SothisTC.oxp (& Sothis.oxp if not already there) to your AddOns-folder. (See OXP if you need to know where to look)

At original time of writing the background Trade Maps in the SothisTC were suppressed by XenonUI. Tweaks have since been developed to counteract this. See here.

KillerWolf was chased away (why?) from the Oolite community in 2012 - the BB thread is thus a tad rusty!