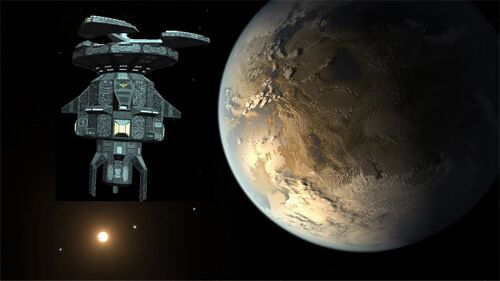 One of Killer Wolf's elegant 2022 additions to the Dockables collection.

Hot on the heels of the Hathor, Isis Interstellar produced another station, the Nephthys. The polar opposite of the Hathor, the Nephthys is a high class, very expensive, luxurious station. Originally designed and built as a one-off for a very special customer, huge interest and demand saw the design go into production a year later, and sales pushed Isis Interstellar's share price to new heights.

Nephthys stations are generally bought by the rich and famous as private retreats, or used as extremely high class hotels and resorts. The rotating upper structures are fully customisable and have been turned into exclusive penthouses, restaurants and hotels.

The main structure of the station contains power, docking, maintenance, accommodation and trading facilities : generally, given their exclusive clientele, Nephthys stations deal only in luxuries and gourmet wines and food. A main feature of the main structure is the large gallery area w/ huge armoured windows that give spectacular spacial and planetary views. Maintaining their privacy, Nephthys stations are located on the opposite side of a planet to the main stations.

Killer Wolf returned in 2022 after having been driven away a decade ago by the friendliest BB this side of Riedquat with a gift of two stations he'd created at the time. This is one of them.