Tianve is most noted for its famous pulsar, the top tourist attraction in the North East quadrant. Visiting by an official liner is recommended, but rental vessels are available as a cheaper option. Zero-Gee Cricket is banned on Tianve at the request of the native feline population. Tianve is also home to the Elite Combateer 'Rebecca Weston', and details on Tianve's most famous resident can be found in the Tionisla Chronicle publications - 'Status Quo' and 'Mutabilis'. 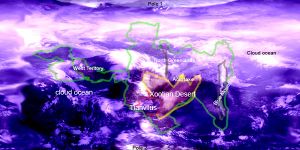 Famous Planets 2.0. adds a custom texture to this planet. Click on the map right for a detailed surface image of Tianve. (Famous Planets OXP)

Status Quo is a novella by Drew Wagar. The author names Tianve as the birth system of the famous elite combateer Rebecca Weston.

Mutabilis is a sequel to Status Quo. In the prologue, Drew Wagar claims that Tianve is home to an Unofficial Galcop Conspiracy Theory Archive:

Tianve is a member of The Pulsar Worlds.

The Rough Guide to the Ooniverse has an entry on Tianve.