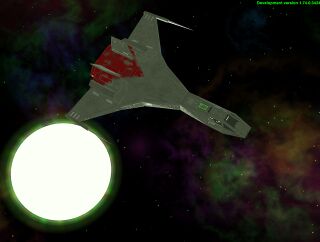 The Vampire MkI and MkII Anniversary Editions (with shaders!)

Although almost identical in appearance to the originals, the Mk I and MkII Vampires have been extensively reworked. The entire outer skin has seen improvements in both armour and cosmetic appearance, and new bespoke Toyota engines have been fitted for reliability and better atmospheric performance. Technological advances have provided a great improvement in both the stability and reliability of equipment fitted to the ships, and also a great reduction in size from the original components – as a result, the new Vampires have a 50% increase in cargo capacity from their originals. One the offence/defence side, this extra space has resulted in the ability for the ships to carry 6 missiles instead of 3, providing owners a greater level of security and confidence when trading in less stable systems.

Isis Interstellar have not reworked the Reaper variants, as later models of the Vampire line have since overtaken this killing machine, however a decision was made to produce an enhanced model, named the "Gold Edition", in honour of the company's CEO. This machine features customised coachworking, and improved speed, energy and recharge rates over the base model at the cost of only one ton of cargo space.

The MkIIs benefit from newer, more reliable twin lasers fitted under the chin. The regular model features beam lasers, and the enhanced "Purgatori" model features military lasers. In addition, the sub-structure of the MkIIs has been extensively modified, and the new ships can take a lot of punishment before being disabled.

The reduxed Vampires have proven even more popular than their forebears, taking the company from strength to strength. As a powerful, agile ship w/ good defensive capabilities and a very agreeable cargo capacity, traders could do far worse than purchasing one of these vessels.

For further information and a chance to purchase, please install the Reduxed Vampires OXP.

The original Vampires but now with shaders!