Difference between revisions of "Missionaries OXP"

A YAH spiritual verse poster for The Church of Giles the Creator.

Missionaries is an OXP that populates space with ships whose inhabitants have a spiritual agenda.

It was released in 2006 by Dr.Nil, and has later been reinterpreted in cover version reboots, in 2013 by Griff as Hognose Missionaries, and in 2022 in Murgh's Iron Ass Missionaries.

These missionaries utilise an array of spiritually and otherwise loaded vocabulary transmitted by ship-to-ship broadcast to get their messages across. The tone of language ranges from the ingratiating and excessively friendly to hostile and rude.

The featured spiritual branches are:

Permission to update his OXPs

Predating the regular practice of issuing license terms, Dr.Nil expressed his views on this subject in his own words. 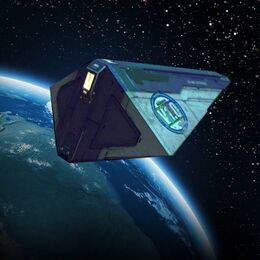 The Missionaries concept was rebooted by Griff in 2013 with a twist. The PROHIP reshaped version of the ArcElite-classic Hognose ship is utilised by all of the above faiths as the vessel to spread their respective gospel, visually made distinct by religion-specific decals.

According to historical records, "Originally developed by the Galactic Navy and Griff Industries for target practice, the Hognose was little more than laser fodder. However, since the ship is a real bargain, several missionary sects purchased large slots and are now flying them to "spread the word".

Although the used ship model is changed, the faiths from the Dr.Nil original are intact, as are the pool of vocabulary used in their comms messages. Tweaks were made to the AI behaviour, and the missionary hognoses operate from a "trader" role, being selected from a system's allocation of that role.

The surly Witchspace Lobster worshippers are frequently let down by their short temper. Here, a lobster in trouble with The Law.

In a regression to the original Missionaries format, and old-school RELOP clunkiness, this 2022 tribute OXP returns in part to the initial selection of ships, skinned in the Iron Ass style, but with an emphasis on rustyass patina. Some changes and expansion of the included religions are made, as well as expansions to the available preaching vocabulary.

The represented religions are: