Church of Giles the Creator 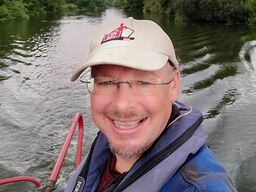 Giles the Creator in his guise as Boatsman of the Blessed Barque: holostim depiction in the Crystal Cathedral of Tibecea

Saint Giles was Immanent when he created The Ooniverse. As his Creation matured, his guiding hand was needed less and less and with the fullness of time he occultated. The Holy One spent some aeons in Minimal Occultation, guiding the Holy Jens, his Vicar of The Eight, Co-ordinator of the Celestial Codes of Creation. Giles the Creator then eventually transcended even this supernal state, attaining the supreme state of Maximal Occultation which he now enjoys. This was the same Epoch when the Holy Jens achieved the Minimal Occultation. The Holy Jens was later reunited with Giles the Creator in the Transcendental Glorious Galaxy (known to the inner initiates as The Ninth) when he too attained Maximal Occultation.

Significance of the term "Saint"

"Saint" was a term used in the Halcyon Era on Sol. It depicted one imbued with spiritual force and who would help those existing in the Immanent Realms.

Excerpt from the Codex of Giles the Creator, Third Codicil, Chapter Six 'Zen and the Art of Coding'.

The Remnant of Sol: An ancient precursor of the holostim. Proof that Saint Giles precedes The Eight, and existed in the Halcyon Era before the creation of the Ooniverse. The Holy Hermeneuticists of the Church argue that there is much of symbolic import in this Remnant:

First Level of Hermeneutics: The figure which moves with care, concern and consideration is Saint Giles, tending compassionately for the bereaved souls on board the barque, which he ministers with such loving care.
Second Level of Hermeneutics (the Contrast): The river is, naturally, a metaphor for the stream of life. The living move along, guided by the Saint, and comes to obstacles which the Saint navigates for you.
Third Level of Hermeneutics (the Contradiction): The rising and lowering levels of river is naturally managed by Saint Giles. This is a reference to the supreme control which the Creator exerts over the minutiae of the lives of the living
The tunnel (some 9 minutes in) is understood by many of the Holy Hermeneuticists to represent the witchspace tunnel linking The Eight to The Ninth, thus confirming that the Pool of Pellucid Placidity lies in the Ninth.

The Notorious Knucklebones of Negation: copies of these exist in the High Temples, placed within the sacred safe of each temple's Barque. Lovingly handcrafted out of Ivory, they represent the way in which Saint Giles directs the destinies of his worshippers, whilst allowing them a modicum of free will. His loving negation of nugatory impediments is earnestly prayed for in the first section of the liturgy, whilst his devoted priests hold his Knucklebones on high.
The Holy Waters: original High Water from the Elite Precursor has been sprinkled on the Lower Waters of The Eight to imbue them with potentiality. This is used in a number of Church ceremonies.
The Wheel of Destiny: representations of the great Wheel, lovingly turned by Saint Giles, as he improves the lot of some and diminishes that of others.
The Pylon of Purity: often features on jewellery worn by the Supreme Sacerdotes of the Church. The top level represents the purity of the Holy Giles, the intermediate level represents the purity of the Holy Jens and the bottom level that of their Supreme Sacerdotes.

The Wheel of Destiny's basic principle is that the souls of all sentient beings are part of a great cosmic wheel that turns according to the will of Giles. As it turns, a soul's fortune will rise and fall according to its place on the wheel; as life goes on, one is subjected to a continuous cycle of rising and falling fortune. Thus, one's fate is in the Hands of the Holy Giles (and his vicar, the Holy Jens), and one should accept one's fate with due humility and not demur!

The fervent gamblers of Aronar subscribe to a variant of this Wheel of Destiny theology, indeed they see it instead as the Wheel of Fortune: For the Aronarians any fortunes won in gambling as a result of chance are seen as perfectly legitimate; if it was not Giles's will that the winner should be so fortunate, he would not have won. Of course, this extends to other areas of life as well; disappointments and failures are seen as only temporary, while Aronarians are not overly proud of today's accomplishment when they may be swept away by a downturn of fortune tomorrow. On the whole, this gives them a rather phlegmatic outlook on life. However, it also gives them a certain contempt for traders and merchants, whom they feel are trying to defy the cycle by always seeking profit at any expense. This has caused some friction with many spacefaring peoples, particularly with their vitriolic neighbors on Aesbion.

Excess material wealth is to be avoided - one should give charity to the Church who will distribute it to those in need. While quality and excellence should be pursued (so that one can enjoy the manifold fruits of Giles' creation) this is not to be done at the expense of excessive accumulation of that which cannot be enjoyed because there is too much of it!

One of the approved forms of this enjoyment is modification and tweaking (called The Embrace of the Dark Side by some devotees and celebrated by the flinging and then the communal consumption of walnut cookies). Prepackaged untweakable commodities are to be avoided at all cost as they are not enjoyable and thus constitute the Amassment of Excess Wealth (AEW) - or the Amassment of Unmanipulatable Modifications (AUM: terminology used in certain more conservative sections of the Church). The more enthusiastic devotees avoid all shrink-wrapping.

Fundamental Tenets of the Word of Giles