What we're looking for is an independent investigator, someone who can avoid the usual channels and root out the information we need. It's not going to be an easy task, and we can offer little in the way of personal protection for you... 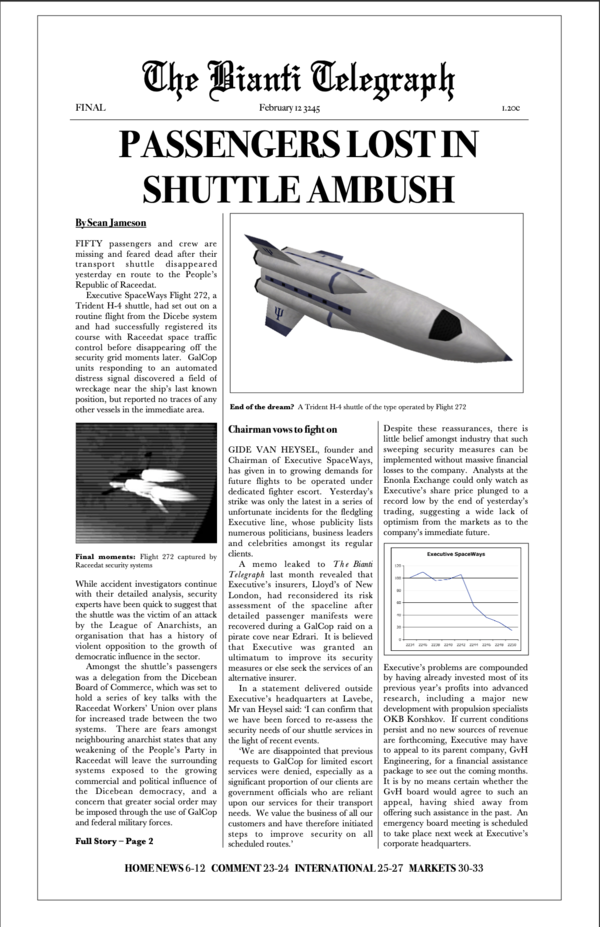 The Bianti Telegraph report on the incident

A transport shuttle on a routine flight in Galaxy 4 is destroyed in a vicious attack that leaves fifty passengers and crew missing and presumed dead. While GalCop dispatches the Anti-Terrorism Unit to investigate, the shuttle's owners, Executive Spaceways, decide to approach Elite combat pilots to help uncover the truth behind the incident. However, in a galaxy that lies on the brink of war, the truth is a commodity too precious to be given away. Success will depend upon a pilot's skills in combat and negotiation; their decisions may well have an impact on the very future of the galaxy.

Trident Down is a multi-stage non-linear mission set scripted by Ramirez and includes a range of new ships, stations and weapon systems. Among the new models are variations of resources originally produced by Ramon, Dr Nil, Griff, Giles, Murgh, Wombat and LittleBear, plus some others specially created for this OXP.

You need an Elite Rating of Dangerous or above.
"Easy" to "Iron Ass". The missions you face increase in difficulty as you progress - not only will your opponents become stronger but you will also receive less guidance on how to complete your objectives. You will often only have one chance to succeed, and failure can open open up a whole new set of problems that need to be solved.

A Bandy-Bandy Courier operated by the ATU

Trident Down features a complex multi-threaded storyline with 9 different possible endings, involving over 150 mission briefing screens amounting to around 19,000 words of text. The OXP adds several new ship and station variants, advanced weapon systems, new AIs and hails, and changes to Systems in response to events.

Among the new powers and organisations featured are the GalCop Anti-Terrorism Unit (the ATU), Jane's Shipyard Intelligence, The Bianti Telegraph, The League of Anarchists and OKB Korshkov, as well as a large cast of individual characters all with their own political agendas.

The mission makes use of data contained in three other OXPs and so requires the following to be installed:

Once installed, the first event will occur when you are docked at a main station in Galaxy 4 with a combat rating of Dangerous or above. In addition to briefings received directly from various organisations, news reports will keep you up to date on the latest events. Be aware that these updates are only available from main stations, however, and so you should make a point of checking in every so often for any details on developments.

Trident Down is non-linear in structure and failure is often an option. If a task does not succeed, you should report back to your contact or follow any instructions and attempt to remedy the situation.

Information on the development of this mission OXP, along with hints and tips (but beware of spoilers!) is available in the Oolite Bulletin Board thread here.