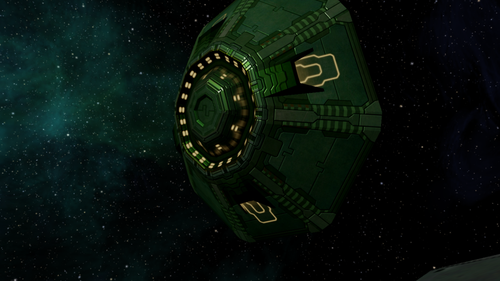 One of the most terrifying experiences a commander can have is being mugged in witch space by half a dozen Thargoid warships. It is widely believed that most who have this experience don't live to tell the tale.

Thargoids are the only actively hostile alien of all the species found in GalCop worlds. They are cloaked in mystery - no one knows where they are from, where they currently live, or what their goals are. Most of their attacks seem to be 'hit and run', almost guerrilla-like in nature. Occasionally they are spotted in normal space, but typically they lurk in the spaces between star systems using a system that can interrupt witch-space transits to ambush traders. Much of GalCop's time is spent battling the Thargoid menace. The Behemoth carrier is often dispatched to interstellar space to deal with known Thargoid ambushes.

When a Thargoid mothership begins to take damage, they will often release Thargons - tiny robot fighters that are remotely controlled by the mothership. An individual Thargon is not particularly powerful, but the mothership will generally release half a dozen - and massed, they can be very dangerous. When there are several motherships around, a single human fighter, even equipped with an iron ass, is likely to be sliced to shreds by Thargoid lasers in seconds. Like many insectoid races, Thargoids tend to swarm whether you meet them 'in person' or in the cold hard vacuum of space.

If your ship is well equipped, it is interesting to note that Thargoid ships are somewhat reluctant to manoeuvre out of your way. It seems that they like to play puth'ra or "chicken" with lasers. ONLY DO THIS IF YOU HAVE AT LEAST SHIELD BOOSTERS AND MILITARY LASERS!

There is one simple priority - destroy the motherships, and destroy them as quickly as possible. Never chase Thargons - they are small, manueverable and difficult to shoot, and you will waste your time (which is often fatal when facing Thargoids). Despite their fearsome reputation, and some of the myths and legends spread about by traders, Thargoids do not have great resistance - a Thargoid warship generally can take less damage than a Python Class Cruiser.

Generally, you will need military lasers to successfully take on a group of Thargoid warships - preferably fitted to both front and rear mountings. If every shot of your military laser hits the warship, it will destroy it before overheating; this was a design goal of the original military laser specification. However, if you miss even just a couple of times, you will not destroy the mothership - and it may be able to release all its Thargons. So be as accurate as possible - ensure you are using the appropriate spacecraft control method (turn your joystick onto High Accuracy mode, or use the mouse). Speed of destruction is essential - don't miss! If there is more than one warship, the other warship will take control of the Thargons that were released by a warship that you have just destroyed.

Don't bother with standard missiles - it is futile. If you expect to engage Thargoids (either because you are in an area where there have been many recent attacks, or if you are specifically contracting to the Galctic Navy), only carry ECM hardened missiles. A worthwhile tactic is to use the multi-targeter to target numerous warships, launch all your missiles, and concentrate on one of the warships with your laser. An ECM-hardened missile will severely damage a Thargoid warship - this will make it much easier for you to clean up quickly.

The energy bomb is an indiscriminate weapon, so only use it when no allied or neutral ships are present. If you are surrounded by Thargoids and nothing but Thargoids, launch an energy bomb. It is often best to shoot at all the warships and have them dispatch all their Thargons - this way you get the greatest bounty (for destroying all the motherships and multiple Thargons) as well as the best contribution to your Elite rating for the use of the energy bomb. There have been rumours that undamaged warships can survive an energy bombing, so use caution.

The Q bomb is less indiscriminate than the energy bomb, and so can be released when friendly ships are in the area (so long as the friendly ships can get away). Thargoids are just as vulnerable to the disruptive field of the Q-bomb as any other ship. Release as close as possible to the largest grouping of Thargoids. With the number of Thargons and motherships normally encountered, a Q-bomb also makes for a very spectacular display.

When combating Thargoids in witch space, be cautious when using your Witchdrive Fuel Injectors. Remember you will still need to jump to a friendly system after the fight and using your fuel to run from the Thargoids may leave you stranded in witch space for all eternity.

If you manage to destroy all the warships, don't congratulate yourself too soon. Certainly, scoop up all those harmless Thargons (Thargoid Robot Fighters) to sell them at the station. This should provide sufficient funds to repair damaged equipment (if any) and purchase another Energy Bomb (if you used it). However, don't be surprised if more warships turn up to make your life difficult again. And if new warships appear, some of those Thargons may suddenly reactivate!

Getting stranded in interstellar space is quite possible, the longer you spend out in the black. Interdicted on a long jump, you could end up stuck with almost no fuel, and no way to jump out. In this situation it's important not to panic or give up. Your best plan is to stay alive as long as possible. The longer you stay alive, the greater the chance some form of rescue option might come your way.

There are a lot of OXP options to help with Thargoid ambushes, or to make them even more challenging. However, please make sure you read all the information about these OXP's before you install them. There may be unexpected consequences from adding them. For instance, adding Interstellar Tweaks increases your chances of having a misjump.

This list is not to be considered as some form of recommendation, or even a complete list of OXP's designed to help with Interstellar space encounters, but merely as a starting point for finding OXP additions that might be suitable in your play experience. The links will take you to the page that describes the pack. Read this information carefully before installing the OXP.

For a full list of OXP's you can visit oolite.org/oxps, which lists all OXP's that can be downloaded directly from within the game, or go to the OXP List which lists pretty much everything that's available.