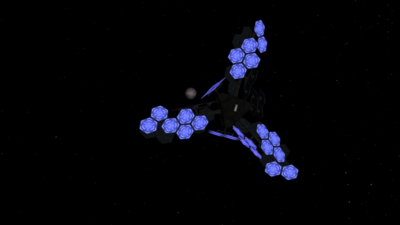 Given the square-of-distance time property of witchspace, you could actually send information between systems fairly quickly with the right infrastructure.

You can jump 7LY in slightly less than an hour, if you do the jump as a series of 0.1LY jumps, and that's counting the 15 second spin-up time on the drive. For the average trader, that's not practical for two reasons - firstly, the strain on the drives means that you'd need to service between each trip, and secondly, all but one of those jumps would be without a witchpoint beacon for guidance.

For a small uncrewed comms drone, though, it's practical. You can calculate the start and end points of each jump with traditional witchspace dead reckoning. Because the drones are all identical and the path between systems is unchanging, you can pretty much hard-code the jump parameters for every step into each one, with just a little bit of a pause for recalculation after each step due to unavoidable drift. Once the drone reaches the target system, it transmits its messages to the main station, and then waits for a passing trader or Galcop patrol to scoop it up and take it in-system. The drones can be cheap enough that it doesn't matter too much if you lose one, or if the witchdrive gets so damaged that they need replacing rather than servicing after the trip. You could get high-priority messages from one end of the galaxy to the other in less than a day. Expensive - you might be looking at a few thousand Cr. for each drone, and need a few thousand of them in operation at once for galactic coverage - but probably worth it for the big galaxy-spanning organisations who need fast comms like Galcop, Galnavy, Tionisla Chronicle, and so on.