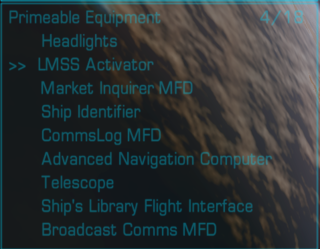 Lists your primeable equipment and allows you to select which you want primed at the moment.

This expansion introduces an MFD that displays a list of primeable equipment in the order that it's primed and an indicator for the current selection. It's intended as a standard feature of the player ship's HUD, so it doesn't appear in the equipment list and doesn't cost anything. All you need is a HUD that displays MFDs. Launch your ship, cycle through the MFDs and it will be there.

Ship manufacturers are still learning how to configure a predictable priming sequence. In the meantime, the MFD needs to be calibrated after primeable equipment items are added to the ship. The MFD will display the instructions when calibration is needed. The instructions are as simple as pressing the prime equipment button until the MFD shows you what you want to see. Calibration is also needed after loading from a saved game.

The MFD is compatible with Auto-prime equipment and any other scripts that change the current selection without using the prime equipment keys, although it will be slightly less responsive in these cases as the changes are detected by a timer.

The MFD can only display nine equipment items at a time. It needs to display the list in a way that is useful to the player regardless of how many items are on the ship. A scroll wheel metaphor was chosen for this purpose.

Pressing the prime button (n) will scroll the list. Two numbers on the top right corner of the MFD show the index position of the current selection and the total number of selections, starting from zero for the None setting. A total number greater than eight means that some equipment items are not visible and the player needs to scroll the list to see them.

Available in the Expansions Manager.