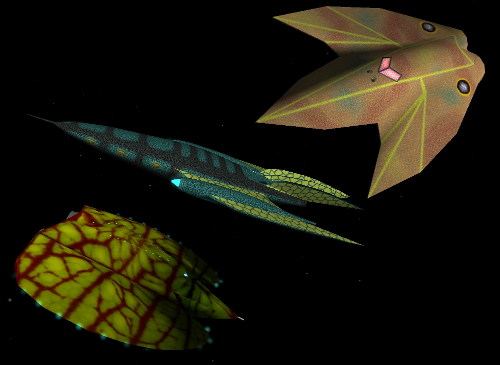 This OXP adds mysterious and unknown Alien ships to the Ooniverse. There are three varieties, and they will only appear rarely, and in different locations based on their behaviour and characteristics.

These are new races and are unknown to GalCop, so your Scanner Targeting Enhancer will not be able to identify them. They will be named simply as 'Alien', and will normally appear as 'Clean' unless they have already caused trouble.

You might get an alert message from the Galcop Main Station if one has been sighted in the System you have just entered, but you will not know what it is or where it is, and it might not even be there at all.

All three have very different behaviours. Some will be aggressive while others may be very peaceful. Two have 'Chameleon' characteristics and will change their appearance in certain situations, and one also has a unique weapon.

I won't tell you any more, as half the fun will be to work out what these Aliens do and where they are likely to be found.

Thanks to Shipbuilder for the models for the 'Odonatean' and 'Scorpax', Capt. Solo for the model for the 'Kephelan', and Okti for the weapon model. Also thanks to Diziet Sma for allowing me to use these ships which were originally intended for an OXP project of his. Many thanks also to Gizmo for testing and appraisal, and for much invaluable feedback.

Download Aliens OXZ (downloaded 5641 times), or get it via the Expansions Manager.