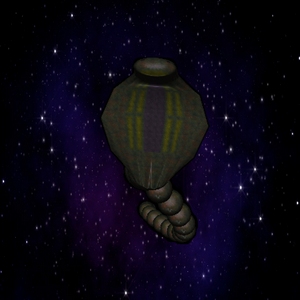 Based on some forum chat from a while ago on the theme of space monsters - introducing the Stellar Serpents.

These creatures can appear randomly in any of the 8 galaxies and wander from system to system annoying traders, attacking ships and generally getting in the way. They use jumping ships wormholes to move between systems and are a pest, so they need to be hunted down and eliminated. The 500 credit bounty awarded for the successful killing of one is nothing compared to finding somewhere large enough to mount the skull of one of these monsters.

Official notification is given on docking with the main station when a serpent is sighted within the current galaxy, and when it is killed by someone else (you're not the only snake-hunter in the Ooniverse!). You can also keep track of where any serpent currently in the galaxy is via the manifest (F5-F5) screen.

Some footage of an encounter with a Stellar Serpent can be found here. Fortunately the Commander seems to have lived to tell the tale.

This OXP requires at least test version 1.75 of Oolite.