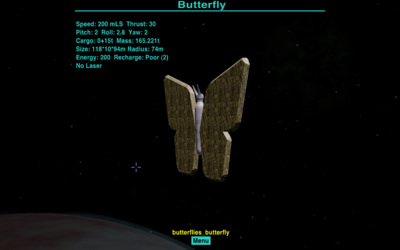 A whimsical little OXP which adds butterflies into the game as a demonstrator of some ideas for more animated and interesting ship designs. In themselves they don't do much, just fly between the stations and the witchpoint (low-chance trader role) either singly or in a swarm. They are entirely unarmed, and will flee from combat whenever possible.

As a few of you already know, I've been playing around of late with some new ideas. One of them is what can be done with more animated ships (without the aid of shaders in my case).

First example of that was my Stellar Serpents, but now I've got another little demo, in this case one that adds some butterflies to the game. Not quite in keeping I know, but they look nice with their flapping wings.

So I thought I'd offer the demo OXP as a showcase of what can be done, and perhaps as encouragement to anyone else who might feel like playing around with the idea. Examples could be X-Wing style attack foils, ships which react to things like high temperature or low energy by changing shape or indeed all sorts of other stuff.

Anyway enough waffle, for those who would like it, the butterflies OXP is here. 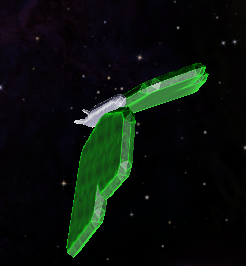 * the conversion of files between XML and openStep. * the merging of files with other files of the same type from other OXPs.

Unzip the file, and then move the folder "Butterflies.oxp" to the AddOns directory of your Oolite installation. Then start the game up whilst holding down shift until you see the spinning Cobra MkIII screen.

Due to the script commands involved, this OXP requires Oolite v.1.74