Idea and background: Griff Krait
The idea came from an experimental design from Griff by Eric Walsh which assigns subentities to equipment.

Specifics in a nutshell

I took two days and got rid of some last bugs before release, and everything runs smoothly now, so I can safely pull this release out of Beta.

The High Poly Classic modpack or HPC. It aims at preserving the original shapes of the classic elite ships combined with added detail using reusable subentities.

It is both an eye-candy and a gameplay mod. You can target and destroy subentities on HPC NPC's which will change their behaviour and performance. For example destroying an NPC's Witchspace Fuel Injector is a good way to slow them down.

Your ship's hull will also visually reflect (using external cameras when undocked) (un)purchased / destroyed equipment. Most vanilla OXP (that is not deemed internal avionics) has been addressed and has a visual external subentity counterpart. See topic on the boards for screenshots of the equipment.

See equipment being added or removed when purchasing equipment; destroyed equipment is also removed until repaired. This does not work in the status screen or the screens inside the station, as I do not think it's possible. (load, save, status, purchase)

- Working landing gear for NPC's and player.
- Working Laser bay doors (weapons on and offline) also different laser nozzles depending on laser installed.
- Different laser colors NPC's only. You will actually know what laser an NPC is shooting you with depending on the color.

-For full details consult the first post on the boards which will give you a pretty good idea of what this OXP does.

This oxp requires Oolite 1.80
All files are bundled in one zip file for your convenience, and all oxp's in this zip file should be extracted into the Addons folder of Oolite.

This oxp works together with 4 others at the moment. Not installing them will make you miss out on some eye-candy.

These oxp's can be downloaded at the links provided:

It is also advised to install the sell-back equipment oxp (by Commander McLane) which I have included in the download. This will enable you to sell back your equipment if necessary. I have adapted Commander McLane's OXP (changes are stated below). If you are using my ships, please use this version instead.

This version of sell equipment oxp makes Thargoid's military fuel injectors reselleable, this was important since it will change the visuals on the ship also. It is included with this download for your convenience, credit for that oxp goes completely to Commander McLane.

equipment.plist : XML to openstep + Milfuel Inj. by Thargoid now resellable.
script.js : added Miljuel injectors to the list.
No other values were changed.

As always, copy the OXP to the addons directory and while starting up Oolite hold the SHIFT key until you see the spinning cobra.

Found something I can fix ? Send me a PM through the boards, and I'll see what I can do.

Editorial note: PM's no longer notify their recipient by e-mail, so better to leave a message on the BB. But since Dertien has not been around since 2016, it may well prove fruitless!

Copy an original savegame before you use this oxp and put it in a safe place. This should not be necessary, but better safe than sorry.

If you get an overhaul and some equipment is damaged, be sure to repair the equipment first, and then do the overhaul, not the other way round. (I will need more testing to see if this is causing problems, but again better safe than sorry.)

A big thank you to:

This pack would not have been possible without the help of:

- Griff, for the custom written shaders file that is used by the ships of the BBS and HPC pack.
- Cim for the javascript code blocks he supplied and his quick and numerous answers to my coding endeavours on the boards.
- Commander McLane for his docking assistant oxp, which was used to make the landing gear script, and sell equipment oxp.
- In no particular order for code pieces: Neelix, Zirael, Norby, Eric Walsh, Commander McLane, Wildeblood
- Commander Zi (Zireael) for testing
- The person who wrote the XLS quaternion calculator (Norby ?) without which this pack was also impossible to make.
- All the other enthusiasts on the forum.

This oxp is free to use, distribute, edit or alter as you see fit without my permission. It can not be used in any commercial product and cannot be sold. It is free software and should only cost you download time. I am not in any way liable if you break your Oolite installation using this oxp. Use at your own risk. I have successfully tested it and it works 4 me.

This program is free software; you can redistribute it and/or modify it under the terms of the GNU General Public License as published by the Free Software Foundation; either version 2 of the License, or (at your option) any later version.

This program is distributed in the hope that it will be useful, but WITHOUT ANY WARRANTY; without even the implied warranty of MERCHANTABILITY or FITNESS FOR A PARTICULAR PURPOSE. See the GNU General Public License for more details.

You should have received a copy of the GNU General Public License along with this program; if not, write to the Free Software Foundation, Inc., 51 Franklin Street, Fifth Floor, Boston, MA 02110-1301, USA.

To view a copy of this license, visit http://creativecommons.org/licenses/by-nc-sa/3.0/ or send a letter to Creative Commons, 171 Second Street, Suite 300, San Francisco, California, 94105, USA.

Showing how the ship grows as new equipment is purchased: YouTube (2014)

Designed by Faulcon deLacy and built in the Onrira Orbital Shipyards by Spalder and Starblaze Inc. to Galactic Navy specifications for a multi- purpose support craft. Mainly used for atmosphere and planetary surface scouting, but extensively too for city-strafing, reconnaissance and infantry air support (and by pirates who favor speed and elusiveness, its primary advantage). Has some interspatial capability not including hyperspace, and must be carried through hyperspace by jump-capable vessels. Hull is too small for the installation of fuel scoops. This new version however has the ability to carry two missiles instead of one.

Caveat Emptor: Different variants may exist to suit various mission requirements, the Sidewinder is like any other ship no exception to this rule. However In the ship purchase screen (F3-F3) all Sidewinder ship types will show as "Sidewinder", and will thus not show a variant name to distinguish them in their roles. Please take a moment to review the sales brochure or talk to your local shipyard before you buy.

For the sake of simplicity, 2 popular types of Sidewinder (SDW) exist in the Ooniverse.

The latter is a version used by pirates and some bounty hunters that was modified by an unregistered shipyard to carry a Fuel Scoop (among other things), with its obvious (mis)uses.

I would like to thank Cim in particular and all others on the forum who have helped with the scripting for this pack, and also for teaching me a bit of scripting. It's a whole different world from modelling, but it has piqued my interest. This Cobra would not have been as nice without it.
You have all been credited in the script file.
Griff, your shader has been put to good use again (same as the one used in the BBS pack), so credit for that goes to you of course.

Player Landing gear (for the narcissists) :

- For player ship, activating weapons key opens the bay doors and raises the gun and missile launchers in their sockets (ED style!)
- NPC's bay door mechanics identical to player depending on yellow / red state of NPC.
- NPC's have different laser colors and gun muzzle model depending on laser installed:

For those who would like to have different PLAYER laser color beams depending on laser installed, there is a workaround. Read this post for further details

Since two front lasers doesn't seem to be very popular with the commOonity; I decided to put a weapons launcher on the starboard side 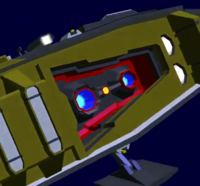 I also added a cheat program (obviously not developed by me) where you can zip back and forth in a system between entities... this program makes it easy to fly from one Cobra to the next, if you just want to do some sightseeing or test some weapons. It's called the Long Range Scanner (LRS).

It is activated by pressing F6 twice and then F5 while undocked. choose the third option (to get closer) and scout for ships...

in order of appearance: