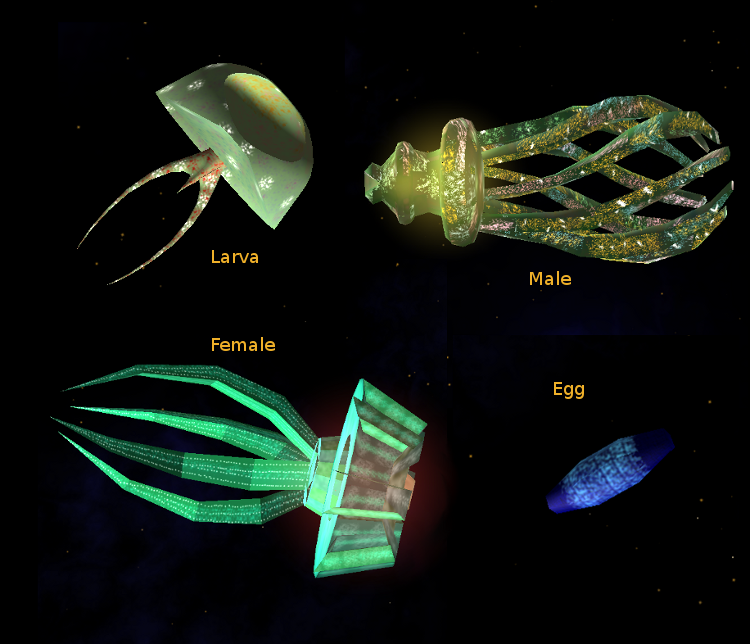 The Star-jelly is a strange, translucent space-dwelling organism, often found in large numbers in asteroid fields, where they may remain for some time trapped in the weak gravitational fields of the asteroids. Star-jellys have limited movement, and are normally content to float free in space being wafted around by the solar wind. They are seldom found in interstellar space.

They are not thought to be intelligent, and although their biology is un-clear they are thought to be more like plants than animals.

They are believed to 'feed' by absorbing the small traces of Quirium found in interplanetary space. Because of their high Quirium content, destroying them is not recommended. Commanders should be vigilant when in asteroid fields where mining is carried out. Miners are aware of the dangers of accidentally shooting a Star-Jelly while mining, and although there has never been a reported case of a miner triggering a Quirium explosion in this way, the possibility does exist.

Most commonly seen is the female which is thought to be twice as common as the larger and more colouful male, and you will also often see Star-Jelly larvae. Star-Jellies produce blue eggs, and these pose a danger to unwary spacers as they are extemely small and hard to see, but just like the larvae and adults will explode in a quirium blast if attacked or hit.

Fortunately all Star-Jellies, including their eggs, will show up on a ship's scanner, and a recent software update has allowed them to have a grey scanner flag to distinguish Star-Jellies from inanimate objects such as cargo pods and rocks.

You can see a video of the Star-Jellies here

Download the .zip file from the link below, extract it and place the .oxp folder in your Oolite AddOns folder.

This work is licensed under the Creative Commons Attribution-Noncommercial-Share Alike 3.0 Unported License. To view a copy of this license, visit http://creativecommons.org/licenses/by- nc-sa/3.0/ or send a letter to Creative Commons, 171 Second Street, Suite 300, San Francisco, California, 94105, USA.

The OXP was developed by Smivs. Star-jelly models by Staer9. Thanks to Fatleaf for pre-release testing.

The OXP is available here.

Download Star-jelly_v3.0 OXZ (downloaded 4869 times), or via the Expansions Manager.

v1.1 released 25th May, 2011. Bugfix to reduce the excessive number generated when Rock Hermits are present.