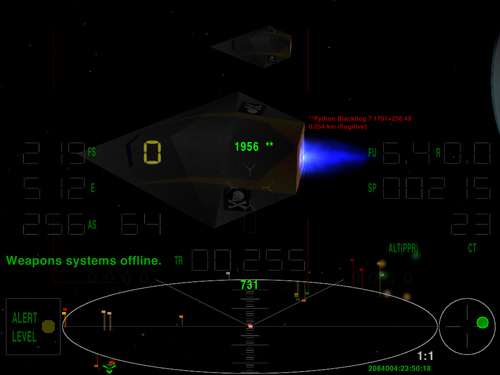 All piloted ships received a version number from 1.0 to 10.0 when they were manufactured. This indicates the age of the ship, so it is not changeable like equipment, but represents the era when the ship was built and thus affects many parts of the ship.

In this way there is now a reason to buy another newer ship of the same type which you have when you get enough money. It creates a new goal to earn more money after you have bought your favourite ship in order to get another with a higher version number. Be cautious, you may need to avoid stronger enemies and retreat from the combat if the situation is hard.

The 1.0 is the normal ship, others get bonuses for: 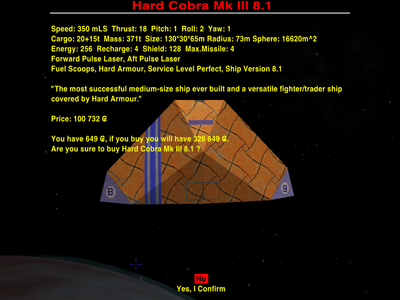 If you hit the enter key while in the shipyard with this OXP, then you will no longer buy the ship instantly but instead read the selected ship's details including the version number in the heading.

Do not buy the first available ship when you have enough money: inspect the version number and wait until a better ship comes up for sale. Unfortunately if you return a ship then the game removes it from the shipyard, but you can get it back if you reload a saved game. If there are more copies of the wanted ship in the Shipyard then save the game. Check the ship versions and if the last is not the best, reload the game and choose the best (the versions will not change).

The awarded Ship Version Equipment show the version of the ship in the status screen (F5). If this equipment is damaged then the recharge bonus is lost until repaired.

If you are attacked by many ships then inspect the version numbers at the end of the names and fight with the strongest first.

The version numbers comes from the read-only entityPersonality value of the ships willfully. In this way a script can set it when creating a new player ship only and can not change afterwards, so you must find and buy another ship if you want to upgrade to higher version.

You can set the maximum level of the awards with $ShipVersion_AwardMax in the Scripts/shipversion.js, the default is 10. These awarded in addition, so a ship with small version may have advanced equipments if start with it or got it from somewhere else than this OXP. 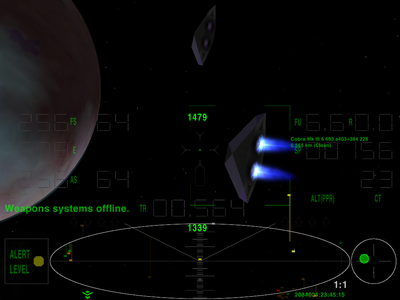 For example a Viper v8 get 490 armour and 384 shield points over the basic 180 energy, which is 6x more but only 20% of the ships has v8 or above. A zealous player can make tables to all NPC ships from Version 1 to 10 with energy, front-aft-side armour, shield and recharge values modified by the awarded equipments. Please publish if you can do it.

ShipVersion OXP can not award the player-only Ironhide Armour to NPCs without HardShips OXP. But without ShipVersion OXP the HardShips OXP can award it due to the armour-making code simulate the NPC IronHide Armour and use the same entityPersonality-based formula to determine the NPCs who can get this.

If HardShips OXP present then all ship get equal level Hard Shield with the version number also.

The Hard Armour (which is the strongest addition of the HardShips OXP) is not awardable by version due to it is not an equipment. Very large and heavy in real, need additional reinforced holders within the ship so can not added easily to an existing ship, must be made a different subtype to hold. It is something beyond the ship version: a new ship with modified name (for example "Hard Cobra"), smaller thrust and orange tiled textures to make visible the very Hard Armour. But Hard Ships will get version numbers also with the bonuses described above.

Ships with less than 30t mass can not get the following equipments due to the small inner space: Injectors, IronHide Armour, Shield Boosters and Shield Capacitors and none from HardShips OXP nor labelled as Military/Naval.

Ships under 130t can not get Big Shield Capacitors, Very Hard Nose and nothing labelled as Military/Naval.

Large ships can get all (be wise): Anaconda, Boa, Boa Mk2, Cobra MkIII and Python.

Drones in HardShips OXP and custom ships under 3t are not awarded with equipments at all (no room for anything), but get recharge and accuracy bonuses as others.

The Service Level equipment show the status of the ship hull based on the following data.

This affect the ship value when you want to sell it to buy another ship so always worth to fix it before.

You will get message from the changes and the name of the equipment show these words to can check it on the status screen (F5). If the version of your ship is at least 8.0 then this equipment contain a repair bot also which can increase 1% in every 5 minutes of flying but can reach at best the bottom of the Weak level (80%). The repair will allocate 100 credits during fly for the spare parts to produce 1% repair and will stop if not enough money left.

Below 8.0 also usable to partially protect your other equipments with these spare parts to take out an equipment damage. Can show the level even if damaged but can not defend other equipments nor repair the ship so worth to fix it.

You can buy "Small Fix" in any dock to increase Service Level. The full Maintenance Overhaul is cheaper and faster to do large repairs: can level up from Minimal to Good in 19 days and almost half in price than many small fixes which need 50 days. But if a tiny Maintenance cost 1% of the ship then Small Fix do the same for 0,5% and both need 5 days equally.

Bad levels can be fixed in 5 minutes/level and cost 100 credits so it is the same if fix it during fly. You can make small fixes if you are short in money, most importantly if your weapons broken apart then must to fix at least once to leave the minimal level before buy weapons. You can reach the perfect level with repeated fixes if you want to get the best price for your ship when buy another.

If you lost your turrets then choose this in the equipment shop from techlevel 5 to fix a turret for 1000 credits.

These color changes can be turned off in the Scripts/shipversion.js if set $ShipVersion_Colors to false.

Unzip the file, and then move the folder named ".oxp" in the end to the AddOns directory of your Oolite installation.

OXP makers can set fixed version from 1 to 10 to any ship in shipdata.plist. Set to 1 is equal with the original ship, but NPCs over 3t get an Escape Pod due to nobody dare to fly without insurance. No version number in NPC names if set to -1.

Set ccl_missionShip = true; in script_info if a ship need to remain untouched.

This work is licensed under the Creative Commons Attribution-NonCommercial-ShareAlike License version 4.0 If you are re-using any piece of this OXP, please let me know by sending an e-mail to norbylite at gmail.