Rise Of The Kirin is a PDF novella bundled with the kirin.oxp collaboratively written by Wyvern and Clym Angus. Gelegeus is the site of an attempted assassination on Commander Roh'i and his crew whilst on the return trip to Tibecea 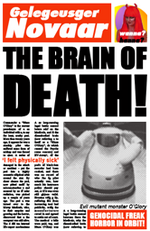 In the biography, Miffi is identified as the capital city of the nation of Mifvivanana, the erstwhile target of the Brain of Death.