Welcome one and all to the Corporate States Ring Racer League!

This OXP adds a new sub-game to Oolite v1.74 or later, that of ring racing. Entry is available at any Corporate State system in Galaxy 1 for commanders with a suitably sporty ship equipped with an Advanced Space Compass and Fuel Injectors.

Once the entrance fee (2,000₢) is paid and a license obtained, the Ring Racer courses become available. The first race is in the Zaonce system, and there are 9 other courses spread around the galaxy. The location of the next one is updated on the ships manifest screen (F5-F5) once a course is completed, and is also marked on the ships long range chart. The racers fastest course time is also noted on the manifest screen, so Commanders can have best bragging rights at their favourite space bar.

To attempt a course, once the license is bought and you have flown to the correct system, you must fly to the course. This is marked by a buoy with a beacon "Q" on the ASC, and is normally found out beyond the witchpoint in the opposite direction to the main planet of the system. For variation there are two types of race. The first is a standard linear race, with the rings in a rough line leading on from the course buoy. The second is a sphere race, where all 10 rings can be found within a 20km radius sphere of the buoy. In both cases the course consists of 10 rings, which can be flown through in any order. The timer begins when you fly through the first ring, and ends once all 10 rings have been successfully navigated. Each race can last up to a maximum of 15 minutes.

Active rings are marked by green flashing lights and show with a green and yellow marker on the ships scanner. Once the ring has been successfully traversed the flashers turn red, and the scanner marker goes yellow. 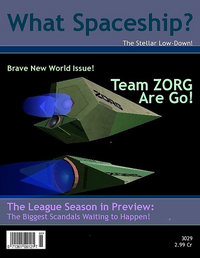