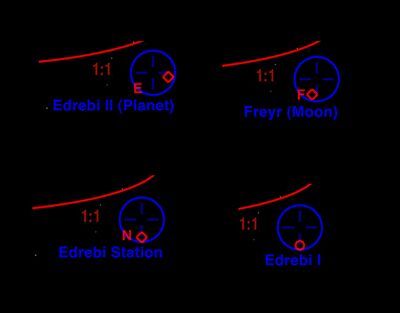 Roolite's illustration for this OXP

A little OXP which enables the advanced space compass to also detect planets (sub-planets) and moons. The planets appear as "P" and the moons as "M". No purchases or installation (other than the OXP) is needed, it just fills in the odd gap that has always existed in the ASC.

The planets are named in order from the sun outward, using roman numeral designations after the systems name. The main planet is referred to as Prime. Moons are assigned random names, although these should be repeatable for a given system across multiple visits.

Each pack has to some degree a theme to it (I'll leave spotting them as an exercise to the Commander), but with more or less packs you can have a greater or lesser variety of name choices. Also for the future, if someone wanted to create a more specific universe with a defined name set (to go along with a fanfic, or some other established source for example) then it would be simple to do.

They could be bundled into the OXP, but it's then fixed and closed (aside from via update) and much less flexible. So I thought it nicer to make it in the core plus packs format, in the same way as YAH is for example. The package size overhead is minimal, and it works fine I think.

Lastly it is possible for other OXPs to introduce their own custom names to added planets or moons by setting its displayName or .name parameter (system.planets[x].displayName = "yournamehere" or equivalent .name). If both are set then displayName will be used. Built-in it will correctly name the Tianve pulsar from the Tianve OXP - if any other OXPs need such naming please let me know.

This suite of OXP's is fully compatible with LittleBear's Galactic Almanac. The details of the interraction between the two can be set using the docked F4 screen settings menu in the Galactic Almanac.

This OXP requires at least trunk version 1.77 of Oolite.