Joysticks: Guide to Setting Up 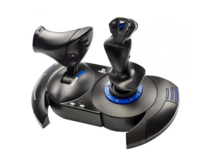 Cholly's guide to Setting up Joystick Configurations in Oolite 1.90

This guide deals only with assigning in-game functions (such as steering or firing a missile) to the axes and buttons on a joystick/throttle.

*Be careful of what you assign to buttons/axes on the base of the joystick/throttle. You will need to let go of the joystick/throttle to get to the buttons on the base. If this is in the middle of a combat, you could find yourself well and truly stuffed, as you can no longer steer/change speed. So avoid assigning functions such as witchspace fuel injectors (i) or firing missiles (m) to the base of your unit!

An analogue-style input where your movements select the amount of change (not available for purely keyboard inputs)
There are at least 4 types of axis:

The usual two axes of a joystick (forwards ↔ backwards & left ↔ right) - x & y above right
Some joysticks have twist as well (clockwise ↔ anti-clockwise) - z above right
A thumbwheel - 6 above left (often used for speed in the absence of a separate throttle unit)
A mini-joystick - not shown above - can look identical to the hat switch, but with very different operation - will add two more x & y axes

A more digital On/Off input: Either (i) press once (F2 rear view), (ii) keep pressed (Fire laser)
There are at least 6 types of button: 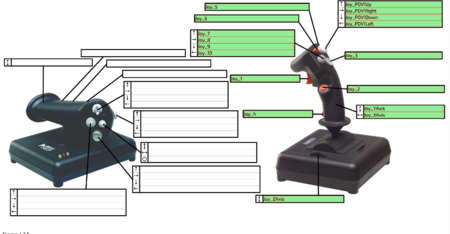 CH's stuff is rugged and is expected to last for decades. It is also light-weight and looks clunky! And big for the hands.
The CH Combat Stick has a two-axis joystick only (no twist) with fine-tuning thumbwheels which can eliminate drunkenness. There is the trigger, a pinky button (Joy_4) and 4 other buttons (Joy_5 is on the far side of the joystick, reached by the index finger). There are two hat-switches. There is a 3rd thumbwheel which can act as a throttle.
The Pro Throttle has all the controls on the throttle itself - none on the base (ie you need never take your hand off the throttle). There are 3 buttons behind the throttle handle and 5 hat-switches! The rightmost of these on the 'lozenge' on the side of the throttle is actually a mini-joystick which can be pressed and acts as a fourth button.
The CH Control Manager Software only works on Windows computers. It is supposedly top notch in terms of capability - and also highly complex to master!

Cranky's settings: Cranky is new to Oolite, and favours the yaw take on astrogation. 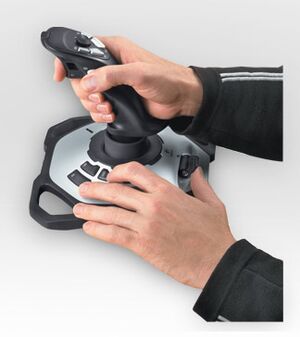 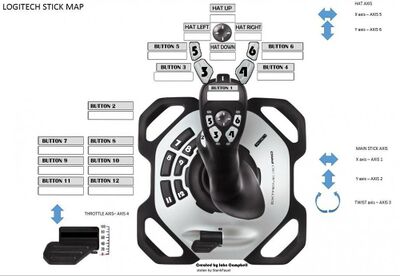 Cody's settings for the Logitech Extreme 3D Pro: Cody uses this joystick with a keyboard. The precision toggle is not used because the axis profiles were set so as to no longer need it. Cody is an old timer who mastered Classic Elite before joining the Oolite boards over a decade ago.

And see Cody's 2017 key-bindings, before axis bindings. Not all buttons used.

Nite Owl's settings for the Logitech Extreme 3D Pro. Another veteran, like Cody, but with a more combat oriented set of joystick bindings.

"Axes 2 & 3 may seem counter intuitive - but they work for me. My guess is that most Commanders would have these two reversed. Also have some very nice spline curves set up as per Dizzy's Guide mentioned at the top and bottom of this page. Everything else is accessed via the keyboard controls. The Advanced Navigation Computer (OXZ) is mapped to Fast Activate 2, key = Tab. Docking Clearance (mandatory at all but Rock Hermits in my Ooniverse) is accessed via the Communications M.F.D. (OXZ). With the Communications M.F.D. active, use the n key to select the "Request Docking Clearance" option and then press b. All other keyboard commands are at their default settings." (Nite Owl) 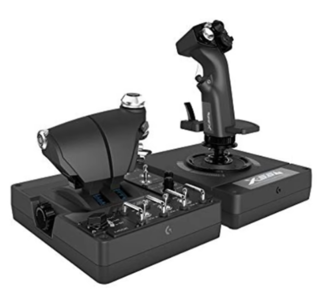 There may be issues with playing Oolite in Windows with this HOTAS - the throttle may not connect.

If so, you may need to (re)-install the Logitech X56 software from here

Once that's installed you can go into the X56 "HUD" program and go to Programming. From there, select the Throttle.

You then need to create a new profile and start adding your controls to it. The Logitech manual is a little obtuse on the subject but it gets the job done. In order for Oolite to effectively recognize the throttle axis you need to set it to Band mode, which lets you assign W to the lower third of the band, S to the upper third (yes, these are reversed from expectation) and nothing to the central band.

After that the rest of the controls are pretty easy to set up.

Once activated, the software will override your default settings and Oolite will accept those commands instead of the throttle's "real" inputs. You can then "clear" the profile if you want to play a different game. (Details from Arquebus 2021). 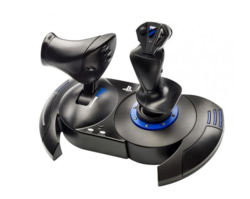 note that joystick and throttle units have not been separated

There are some 3 very similar Thrustmaster entry-level HOTAS (Hands on Throttle and Stick) sets: T.Flight 3, 4 & X. They seem mostly designed for those using gaming consoles as the buttons on each are quite limited in number.

They are very nicely designed - nice curves, screw holes at the bottom for attaching to something heavy like a desk (if so desired), an Allen key (living in a base recess) to separate the two halves of the throttle and joystick, a simple knob to stiffen up the joystick etc. Another point is that since the joystick and throttle are wired together, they only occupy one USB slot on the dreaded computer.

It seems that this is not compatible with the AppleMac, with the twist, throttle and axis on the back of the throttle not seeming functional. What neither Thrustmaster nor Apple can be bothered to tell you is that you need to keep the PS, SHARE & OPTIONS buttons held down while you plug it into your AppleMac. The green light should then come on under your PS button, and you should find the HOTAS fully functional. This is without the Thrustmaster software being loaded.

Cholly's settings: Cholly uses this HOTAS with an Elgato Streamdeck, so the confusing missile controls are there where they can be clearly labelled and understood. Cholly is quite new to Oolite, and has no other real experience of space sims.

This mapping is from 2015/6 at which stage it did not function when the ship was docked. From this BB thread.

This mapping is from 2013. A shift key doubles the mapping potentialities. From this BB thread.

The code for all this was published by Kanthoney back in February 2014. Dizzy's guide was crucial in explaining it all to people (July '14). In the years since, it has been expanded.