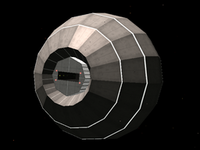 Murgh Shipyards are based in Teorge. Home of the clones.

Their catalogue includes the following

Cobra Clipper SAR to the rescue

Controversy over the Cobra Clipper SAR

Commisioned by Obnoxicorp to give its struggling Insurance arm some substance, the Murgh Shipyards was given the task of constructing a rescue vessel, using the successful Cobra Mk.III as its foundation. Heralded as having gleaned the most advanced scanning technology from captured Thargoid vessels, with a range of reportedly twice that of the regular consumer model, it made an impressive debut at the launch. But the rumours soon spread that the much-hyped scanner wasn't nearly as effective as claimed, and reports of specifically targetted pirate ambushes (a large score being known as "hitting the gravy train" in slave trafficker parlance) became commonplace. As an additional own-shot in the foot, it got to be widely known that Clippers packaged with quick licencing were sold on the open market as Obnoxicorp sought more profit by franchising the EscapePod retrieval industry, and any remaining positive spin from the original campaign seemed to have vanished. This has proved to be a bit of an embarrassment to Murgh Shipyards. The results after the most recent recall remain to be seen.

Issues with the Leviathan

Plans for the Leviathan were drawn up at the Navy's behest by a team headed by the founder of Murgh Shipyards and the first prototype was laid down at their orbital headquarters. The Navy's brief was simple, but to the point: "Create a ship that is capable of operating for extended periods in deep space, with the ability to carry, equip and maintain a full tactical wing of Naval fighter and lander craft and with a reasonable offensive/self-defensive capability for the best possible price." Murgh's designers worked hard on the plans and within fifteen months were at the stage where they could begin laying down the actual hull of the immense ship.

The vessel's size was such that it quickly out-grew the capacity of the orbital shipyard, so the shipyard had to be extended and updated around the Leviathan! The initial prototype took almost two years to be complete and was immediately sent out on its fleet trials. The navy assessors were concerned by the fact the huge ship only carried six plasma casters in ball turrets along the flanks, but concluded that the Leviathan would have to be designated as a support vessel, not a front line ship. This suited just fine, since its cavernous launch decks could accommodate far more ships that the tactical wing first envisaged by the preliminary brief.

Controversy over the Rattle Cutter

Murgh Shipyards of Teorge, developed the ship speculatively without an invitation to tender on the good information that GalCop was looking for a more powerful ship to equip Behemoth warships to be used in battle against the Thargoids. However, no contract was forthcoming, and Murgh Shipyards was forced to sell the ship on the open market to avoid bankruptcy due to the colossal funds required to develop the ship: to avoid the compromises needed to have a plug-in-anything-and-play ship (often known as 'plug and pray' by more cynical commanders), Murgh Shipyards instead fitted entirely custom equipment, tailored specifically for the Rattle Cutter.

The widespread use of the ship as a weapon of crime caused the citizens of many planets to protest to their governments with the aim of banning the ship (or other similar specified ships) to anyone other than law enforcement or the military. Responsible owners of Rattle Cutters retorted by modifying an old cliche: "Rattlers don't kill people, people kill people". Seeing the handwriting on the wall, Murgh Shipyards voluntarily restricted sales to "official purchases only". For a time, this settled the protests - however, the company has never actually defined who it considers "official", and the more cynical campaigners have alleged that the company treats "official representatives of pirates and assassins as official".