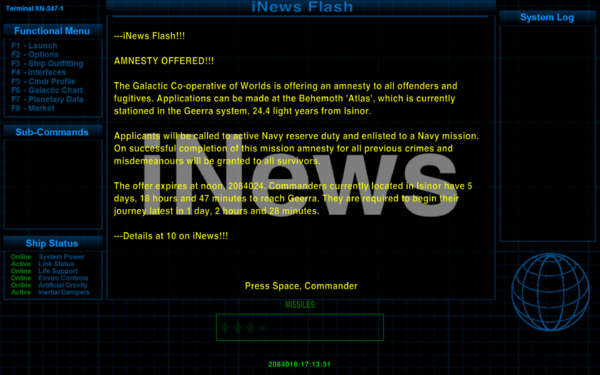 Anarchies rejigs the Bounty system, making it much more difficult to lose criminal status. While the older system (which was much more forgiving) made sense in the days of the feeble capacity of 8-bit computers, it was also unrealistic.

The Amnesty offers help redress the harshness of the tougher system in the context of a universe under attack from the Thargoids.

From Anarchies: GalCop's military arm, the Galactic Navy, is always interested in skilled pilots with combat effectiveness. The ongoing war against the Thargoids means that the Navy sometimes can't be too picky in whom it calls to active reserve duty. Therefore GalCop issues an amnesty order from time to time. Pilots willing to take the offer have to report at a naval Behemoth parked in a system close to a current war zone. The amnesty offer is announced foremost in all kinds of meeting points for commanders who have a legal record to clear, among them Hacker Outposts and Salvage Gangs. GalCop is only considering an amnesty for criminals in exchange for their help if the Navy is really in a tight spot, therefore expect the deadline until the offer expires to be equally tight. If you make it in time and find the Behemoth, you'll be given a naval assignment. You have to fulfill it—and come back in one piece—in order to get your legal record cleared. Just don't get yourself involved in criminal activities again!

(NOTE: everything mentioned in this paragraph requires Behemoth.oxp to be installed. If you don't have it, you won't receive any amnesty offers.)