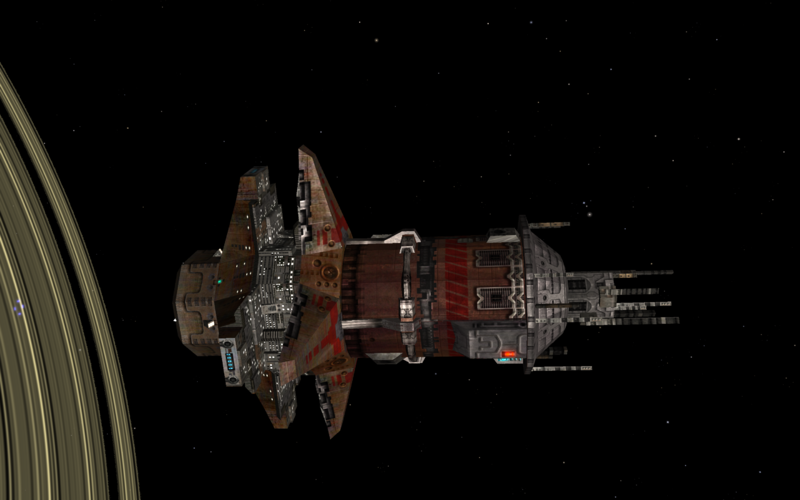 Following long-running protests from traders about the outmoded commercial facilities on Coriolis stations, the Galactic Co-operative grudgingly promised to replace these ageing structures. Technology-transfer statutes prevented the Co-operative from simply using the Dodec, Ico or other advanced designs, but there was another model available: the constore. Already popular with pilots for their efficient service and mercantile focus, and built entirely with public-domain technology, the constore seemed to be the ideal solution. Eager for a quick and low-cost fix, the Co-operative placed a string of orders with the Constore Consortium.

But, as the planners began to realise, a main system station is not a constore. A Co-op main station is something far more than just a trading centre. It is a meeting place; an embassy; the central bureaucracy for all local-volume government above the atmosphere; and the command-and-control nexus for the Galactic Navy in the 95% of systems that do not host a Naval SecCom.

The conversion costs soared. Just refitting the constore's defensive fighter bays – originally designed for small, undemanding ex-Navy Sidewinders – to accommodate high-performance GalCop Vipers threatened to rupture many poorer systems' capital budgets. Worse, although the stations were built with PD tech, crucial parts of the trade hall, loading docks and internal traffic-management systems turned out to be proprietary, and surprisingly high annual leasing fees to the Constore Consortium had slipped unnoticed into the contract the Co-operative had signed so hastily.

Worse still was the realisation that the new stations' projected profitability depended on running them like constores – specifically, they counted on income from the riot of advertising that festoons the average Tescoo, Pi-42 or Star store, not to mention a brisk and lucrative trade in controlled commodities. Co-op rules on visual cultural sensitivity placed strict limitations on selling advertising as a revenue stream, and established regulations barred the export of narcotics, slaves or firearms from system stations, except under license and only to the local planet.

In short, the entire project was a legal, logistical and financial nightmare, a stupendous blunder in the grand old tradition of the Co-operative. After numerous inquiries, widespread sackings, eighteen demotions, eleven resignations and two suicides, the project was cancelled. The Merchants' Guild roared their disapproval, and the Constore Consortium launched an enormous claim for breach of contract combined with a class action suit on behalf of their shareholders for loss of earnings and mental anguish. Eventually, no doubt, some unsatisfactory compromise will be hammered out, and all parties will retire in a welter of accusations and buck-passing – also in the grand old tradition of the Co-operative. Meanwhile, a handful GalCop Trade Outposts circle a few embarrassed worlds, monuments to the Co-operative's less-than-glorious record in decision-making.

No difficulty. It only adds a replacement station.

This OXP is now part of

To play the just this OXPitself , unzip the download file. This will create a folder "Galcop_trade_outpost.oxp" Move that folder under the AddOns folder inside your oolite installation.

Fix a missing shader file
reduce the appearance of the station. Now it replaces only 10% of coriolis stations
Changes to the model (made by Griff) in order to be even more different from the constores
Added a requires.plist