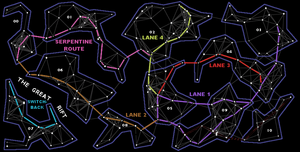 The Great Rift separates the un-named region in the lower left hand corner of the Galaxy from the rest (it is more than 7ly from one side of the rift to the other - and hence unjumpable by hyperdrive/witchdrive engine). CaptSolo named the region as the Baying Wolf region, but it does not seem to have caught on.

The The Rubicon Crossroad & The Five Point Trade Barrier are regions on the lost side of the rift (named by ClymAngus in his authoritative maps). There is one Space Route: the Far Rift Reach.

There are almost 30 solar systems there.

The Society has several interstellar stations devoted to research and development, where they study Thargoid technology and try to adapt it for use by the GalCop races. Most are quite small and many are built into asteroids and are in practice just large versions of the monitor stations.
The main research station is a much more substantial structure almost 2Km across and is situated in the Great Rift of Galaxy Seven. The station is of a unique 'dumbbell' design and has a staff of over 5,000 who both live and work on the station. Because of the remote location workers' families also live on the station and so it has many civilian facilities such as schools, a hospital deck and shops and recreational areas. The total population can therefore be as high as 20,000. (Xeptatl's Sword)