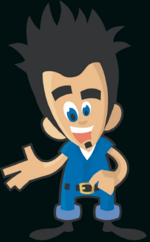 Samuel Schilierenzauer was just 22 years old when he won The Big Oone, the Lottoo game where seven numbers from a hundred pays the jackpot (a 1 in 16,007,560,800 chance). The game is played on hundreds of worlds in all the galaxies, but Samuel was the only winner in Week 32 three years ago, after the only triple rollover in The Big Oone history.

The young man, previously a greasemonkey from Aisqu in Galaxy 3, became a celebrity overnight. His name and image adorn everything from Lucky Bastard breakfast cereal (It's delicious, you lobstoitards™) to holo-commercials for the Lottoo itself.

Schilierenzauer says he spends most of his spare time throwing credits in the pursuit of women, parties and tinkering with fast ships (and the rest of the time, he says, he "just wastes"). He has no product to sell, apart from himself and his celebrity status, and he intends to have fun sponsoring his own team "until something better comes along".