There are now SIX categories of player laser. 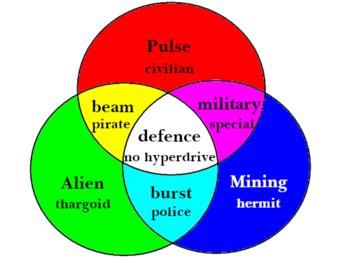 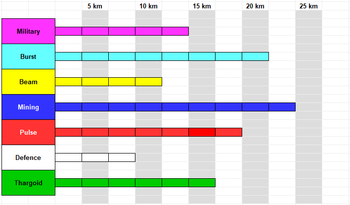 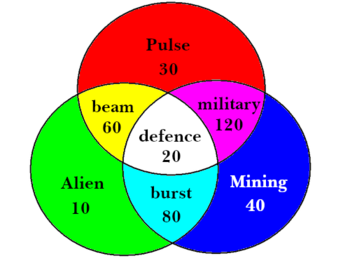 Lasers and power (adjusted for speed)

To avoid the extremes of being consistently outgunned at game start and of having minimal challenge once acquiring a military laser.
To break up the Pulse -> Beam -> Military progression with its doubling power progression, thus making each step too large.

Defence Laser, lower power than pulse, granted to non hyperdrive fighters (you no longer start with the worst laser)
Burst Laser, between beam and military (although nearer to former), granted to slow freighters (you can run but they put up a better fight)
Mining Laser updated to be combat practical and slightly superior to pulse

Player has the same range of progression as before but it's now less extreme (may need to increase pricing progression in future...)

Non-players now have an expanded range with (crucially) options between both pulse to beam and beam to military.

Thargoid laser might seem terrible but it always has facing (a huge advantage), and once it's in trouble it soon has friends too! (I've changed nothing with regards to this weapon)

So pulse and mining lasers compensate their low damage potential with relatively long range, while the super-fast beam and military lasers don't have the best range but are more formidable.

The burst laser might look to be the best of the bunch but bear in mind that it is closer in damage potential to the beam than the military.

The extent of the scanner is 26.5km if I recall/remember correctly, so there's room for an über version of each laser that extends its reach by another 5km (mining laser at 30 km would only match current default range of military laser).

The Expansions Manager is currently making it impossible for Redspear to upload v.0.6 of this oxp - so until it relents, click here and then place the oxz in the AddOns/ManagedAddOns folder of your choice - see OXP for more details if needed.

Therefore the doubling problem is removed (extra step over same distance) and NPC ships can exhibit greater weapon variety without necessarily overpowering the beginner or underwhelming the experienced.

As for laser 'mechanics', well the military laser was just an overpowered beam laser but yes, I've tried to include that.

So the burst laser really does (or at least subject to further testing should) operate in bursts. Meanwhile the military laser, despite being no less dangerous, has an almost imperceptible stutter rather than a continuous beam. In that respect, I think I've actually made them more distinct than before whilst employing all the primary and secondary colours of the additive colour model.

I need to test more (still not at v1.0) but I really think it helps to makes combat more interesting from the start of the game, rather than just something to be always avoided.

Continuing my series of pompously titled oxps, I'm looking at lasers this time and I believe I can make them more fun.

The Beginner's Experience (the pulse laser):

Summary: You need to run a lot which would be fine except that it takes so long to do so.

The Novice's Experience (the beam laser):

Summary: You have a much better weapon now but you don't get much chance to exploit it. You still need to run a lot due to the prevalence of pirate packs and likely due also to threat assessment mechanics

The Veteran's Experience (the military laser):

The military laser is far too good to give to NPCs, but once the player has even one (on the aft mount, preferably) it becomes virtually impossible to lose most fights regardless of enemy numbers because of its extreme range it's not necessarily particularly fun to fight like that.

Summary: If you're cautious enough then combat becomes much easier. The jump from beam to military is enormous: double range AND double power. Arguably this is exactly the advantage that the player needs most of the time but the range advantage on a rear mounted laser is overpowered. Rear lasers encourage not only sniping but 'shooting gallery' sniping where most targets can't get near you unless you let them.

The problem, as highlighted by another_commander in the rescaling thread, would be that the beginning player would be rewarded for rear mounting a pulse laser and picking off targets all too easily. The solution could be a very simple one: only grant the beam laser to the faster ships. For example:

Is there a way to challenge the military laser's dominance without compounding the problem? 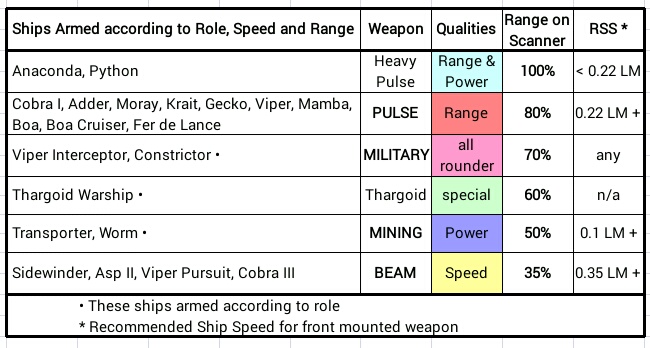 We now have six laser colours encompassing all of the primary (red, green, blue) and secondary (cyan, magenta, yellow) colours of the RGB colour model; all distinctive and clear to those without colour blindness.

So much for cosmetics, what do these new heavy pulse lasers add to gameplay? Imagine shots from larger, less mobile vessels, intermittently fired from great distance; trying to dodge incoming fire in the hope of closing in to where you can make your superior rate of fire pay off. Sounds cool but what about exploits, balance and the like?

Just as the range bonus to the pulse laser grants it some kind of a chance versus a beam laser the heavy pulse presents at least a minor challenge to the military laser.

The anaconda and the python are far too slow to mount a beam laser (and military lasers are too dangerous for most non player ships) but shouldn't these mighty vessels have something more powerful than a pulse laser at their disposal? Get their rate of fire right and the sniping player with a military laser now has a reason to head towards the target rather than away from it. Perhaps they should only be available to the largest player ships or imagine them on capital ships... We'd now have room for oxp behemoths to snipe at the player!

The beam laser is really a dogfighting weapon now but it's quite potent at that range and the mining laser is perhaps a passable weapon when pressed into service, as it was intended to be:

But what about player progression, upgrading your weapons?

Many ships aren't really suitable for a beam laser anymore and there weren't exactly a glut of weapons to chose from in the core game in the first place. Well, canonically there was more than one kind of pulse laser, so why not something like this? 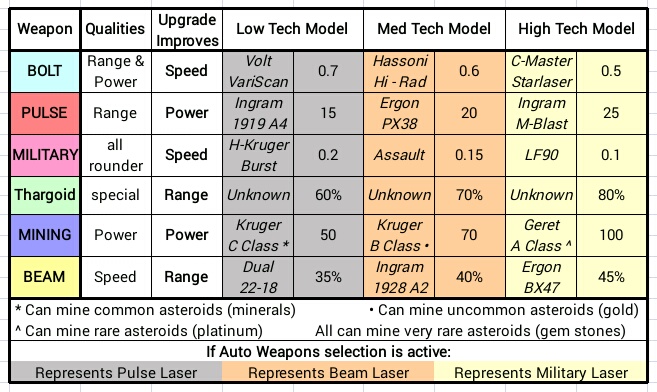 You now have a reason for ships to favor different weapon types beyond pure economics. There's strategy too: beam laser on the front perhaps but are you sure you don't want a pulse on the rear? Want to upgrade your laser? There are now 3 varieties of each and you're more likely to choose a different type than before.

Note the potential use of an auto_weapons type system as well as simple possibilities around mining.

How would a standard non-player distribution of weapons look?

Traditionally the beam laser made the pulse laser obsolete and then the military laser did the same to the beam (by an even bigger margin). That suited the original Elite much better than it does Oolite IMHO and I think this might be a way to keep the flavour of the original weapons without some of the inherent problems.

Re.: my New lasers, the two oxps currently don't mix very well although I have a plan to address this without requiring significant changes to the UBER new lasers that some people seem to be fond of. Fully compatible? No, at least not in any way that makes much sense. I've only recently removed the exclusive requirement to this oxp in anticipation of updating New lasers.

(New Lasers introduces 3 new categories of laser in addition to the burst laser: bolt, variscan & defence lasers. There are also 3 varieties of each of the 8 laser types. One variety of each is an über-laser, buyable only in one system in the galaxy!).