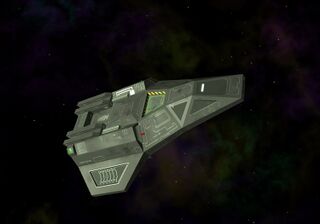 For some time now, rumours have been circulating of a mysterious new ship that has only been fleetingly glimpsed in WitchSpace regions. Two months ago, a Gecko pilot posted a photo taken from his gun camera taken in the middle of a huge fire fight; sleek, dark, multi-gunned ships that appeared to have an unknown propulsion unit : instead of the customary blue exhaust plumes, they exhibited nothing but a pulsing green glow. GalCop officials were concerned that this may have been a new Thargoid vessel, but the Gecko pilot confirmed that the ships were attacking the bug ships in the area – and very effectively at that.

A week later, another ship spotted a similar craft in the Eraso system, though no pictures were obtained. Internet discussion was heated, some writing the photo off as a hoax, other claiming a new alien race had been discovered, some claimed it was secret military technology. Well, Which? Space can now exclusively confirm that the latter is correct. Three days ago, an Anaconda in Tianve was jumped by pirates, and while attempting to flee suffered a misfire of the jump engines, putting her in WitchSpace …seemingly alone, and right in the middle of another pack of Thargoid vessels. Fortunately for the Anaconda, she wasn't actually alone : several of these mysterious new ships were present, evidently running "Scanner Jammers". Despite being severely damaged, the Anaconda survived, and one of the new ships jumped to Zaatxe, opening up a Cloud to allow the Anaconda return to a normal system, and one of the crew members managed to grab a couple of photos. 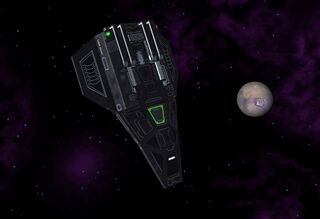 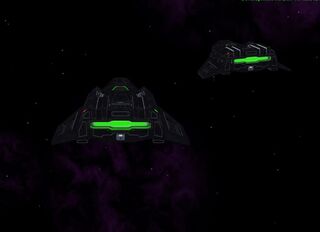 Which? Space has examined these photos extensively. Keen ship-spotters will note the distinctive nose appearance, which was the biggest clue to the vessel's origins : obviously based on the Vampire MkI Anniversary Edition, we contacted Isis Interstellar who eventually confirmed they built the ship and graciously allowed us to contact one of their trusted test pilots, the somewhat-notorious Rebecca Weston, to obtain a few more details.

For some time now, the battle w/ the Thargoids has been escalating. They are bringing stronger, deadlier ships to the fight, and far more of them. In return, the Navy has struck back in the form of the Werewolf, Dominatrix and Diamondback Tactical Space Fighters. Given that past pedigree, it was perhaps obvious that any new military ship would have come from the same stable, and indeed this new vessel is officially classed as the next member of the family line; the Vampire MkV. Her designated name is Spectre , and it's easy to see why she lives up to the premise of being a ghost ship. If the dark paintwork and Scanner Jammer weren't enough, the ship is also fitted w/ a cloaking device, reducing the ships to little more than flickering glimpsed images. Get past those, and you still might find it hard to get a look at the ship : comments were made some months ago about the military and Isis Interstellar offering top credit for captured Thargons, and the reason is now revealed - that green glow is a new, top secret military engine based on Thargoid technology. Rebecca was limited as to what she can tell us, but revealed that the propulsion unit doesn't use regular fuel, and is capable of pushing the Spectre to 0.45LM, outracing even the legendary Asp.

When it comes to offensive capabilities, the Spectre is not lacking, and has apparently earned the nickname "the widowmaker" amongst some of the test pilots. Three military lasers are backed up by 8 missiles, making the ship a very hard hitter indeed. When we asked about an ECM Jammer (a rumour that was doing the rounds at around the same time the alien items buy-up was happening), Rebecca pointedly refilled her glass and waited politely for us to ask another question.

The dark skin of the Spectre is not entirely for aesthetics : apparently the skin is a new alloy, extremely tough and yet lighter than current ship alloys. This makes the Spectre able to take a large amount of punishment if lasers happen to breach her shields : Rebecca says a large portion of the wide body of the ship is given over to energy plants and regenerators, giving a big Energy Level and a rapid Recharge Rate – though she was unable to confirm the exact figures.

Apart from some test vessels, all Spectres are in operation w/ Damage, Inc. – the Naval Special Forces unit who are invariably at the front line of the Thargoid war. Rebecca says the military version of the Spectre doesn't have a fuel scoop : given that the new propulsion unit doesn't use that kind of fuel it was decided not to fit one. The Spectres still need a conventional jump engine to open up a Cloud, and have a fuel tank to feed this motor, but this is seldom used and is regarded as an emergency measure only, allowing a ship to exit WitchSpace if needed. Apparently, however, a number of test prototypes have been fitted w/ a scoop for cargo retrieval and replenishing jump motors when operating in normal systems, although Rebecca states that at present Damage, Inc. have no plans to operate the ship anywhere but WitchSpace. Asked about the retrieval of escape capsules and Thargons, Rebecca says the Spectres currently operate in a pack that has either Diamondback or Dominatrix wingmen : the Spectres lead the attack and the scoop-fitted wingmen retrieve any escape capsules – though Rebecca would not say if any Spectres had been lost in combat yet. As for Thargons, Rebecca gave a little cold grin and stated that they are no longer required by the military.

We were able to get a good look at a Spectre as Rebecca actually turned up in one, and we can confirm it is both a beautiful and fearsome vessel. Rebecca vetted which photographs we could use. She was forbidden to allow us onboard, but says the ship is surprisingly roomy and extremely well appointed, giving the feel of a high class bounty hunter's ship rather than a functional military vessel. Miss Weston invited us to make a misjump to get a first-hand view of how the Spectre handles in a combat scenario, but unfortunately we, ahem, had to get back to the office…

As she fired up her standard jump motors to head back to parts unknown, we asked Rebecca if a civilian version of the Spectre would be made available. Long, loud, raucous laughter was only cut off by her disappearance into a WitchSpace Cloud…

To be filled in