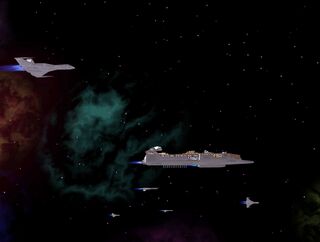 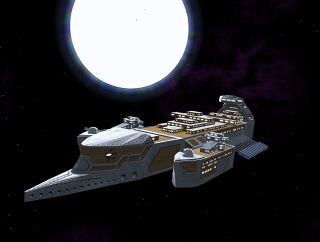 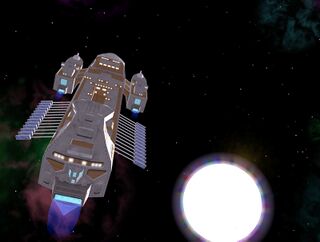 Since they entered the interstellar scene w/ the first Vampire ship, Isis Interstellar have gone from strength to strength, becoming one of the most powerful and respected companies. Although their main focus remains on combat craft and Naval contracts, Isis Interstellar have occasionally branched out on sometimes high-risk projects, like the Nuit space station. The most recent expansion has involved the creation of Isis Customs, a division of the company that specifically caters to private clients, producing bespoke vessels. The first vessel produced was the Scorpius, and this vessel was used as a proving ground for the division.

Some delays were encountered due to urgent military contracts, but finally the 600m ship hit the space lanes, drawing much media attention, not least for its unusual look. Commander Burchill wanted to keep the ship's oars as part of the design, so rather than just making some cosmetic attachments, they were transformed into solar panels to provide extra energy in emergencies.

Griff Industries provided custom coachworking, resulting in a panelled wood effect for the hull. Rumour has it that the ramming spike on the bows is strong enough to run through a Coriolis station.

True to the original ships, the Scorpius is mainly a trading and transport vessel, combining vast cargo space and many cabins of varying degrees of luxury. Like her predecessors, the Scorpius is also a tough, dangerous battleship : heavily armoured, armed w/ three military grade lasers and a dozen missiles she is capable of carrying both cargo and passengers into the most Anarchic of systems. As if this wasn't enough, the Scorpius is also protected by her own escort : Isis Interstellar provided eight customised Vampires to protect the ship.

Scorpius was a huge success. Although the contract itself did not provide much of a profit, the ensuing media attention resulted in a flood of enquiries. Isis Customs tripled its staff base almost overnight and is fast becoming the biggest division of the company.

Thanks as always to those who helped me on the boards and via PM, especially Commander McLane and Eric Walch.
Thanks as ever to Griff for his shaders.

name of hull model changed as per Eric's advice