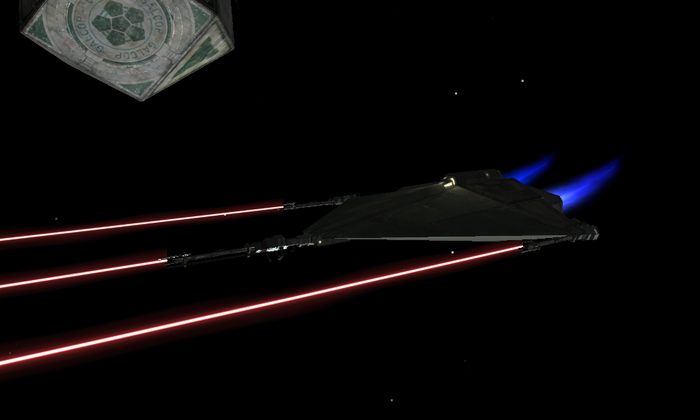 Developed as a next step after the Military Laser, placed outside the hull where a better cooldown is achievable.

One can now find costly 'sniper variants' of ships in high-tech shipyards with a visible big Sniper Gun installed:

Boa SG has 2 Sniper Guns but the second can only fire from Oolite v.1.83, where together they also produce double the heat!

Krait SG has 3 Sniper Guns which produce single heat with Separated Lasers due to being mounted distantly enough from each other.

For the Heavy Sniper Gun you need a Python HSG, Python BattleCruiser or Prototype Boa.

Auto Crosshairs and Xenon HUD are supported with custom crosshairs.

The strong and long range (20km) Sniper Gun fits onto ships only with a specially large laser mount on the hull itself. It delivers almost as much damage as a Military Laser, using less energy thanks to the costly high-tech components. Moreover it can mine asteroids and heats up half as fast due to its position outside the hull.

The big sniper gun subentity model is within this package, based on the gun on a Krait's wingtips made by Griff.

This could motivate ship builders to mount spectacular guns outside the hull, where a better cooldown is imaginable.

The Sapper is a Sniper Gun in 'overdrive mode': delivering 5x more damage at point blank range than at max. range but using 5x the energy and generating double the heat. The 5x damage occurs within 500m, 2x within 2km, 1x within 20km. Note the base damage/second value is only half that of Sniper mode, so at and within 500m it does 2.5x more damage than a Sniper Gun.

Can cause some damage when the shot narrowly misses the target and can also mine asteroids. Unmasks your cloak when firing. Such lasers cannot be separated and so much heat is generated in ships with multiple lasers.

Overheating can damage a Sapper and reduce its effectiveness to that of a Sniper Gun. In this case you should fix your Sapper Mode equipment.

Sappers revert back to Sniper Guns when less than a full energy bank remains.

This is a twice as powerful variant of a Sniper Gun with a longer range (25 km), mining ability and super-effective cooling outside the hull. This allows twice the fire rate without faster overheating! Designed for ships over 250t mass like Python HSG or Prototype Boa.

The Heavy Sapper is a Heavy Sniper Gun in overdrive mode: delivering 5x more damage at point blank range than at maximum range but using 10x energy and generating double the heat. The 5x hit is within 500m, 2x within 2km, 1x within 20km. Note that the base damage/second value is only half that of Sniper mode, so at and within 500m the Heavy Sapper delivers 2.5x more damage than a Heavy Sniper Gun.

Can cause some damage when the shot narrowly misses the target and can also mine asteroids. Unmasks your cloak when firing. Heavy Sappers cannot be separated so they become very hot in ships with multiple lasers.

Overheating can damage a Heavy Sapper and reduce it to a Heavy Sniper Gun. In this case you should fix your Sapper Mode equipment.

Limits the point-blank damage caused by Sapper weapons to 2x instead of 5x but gets damaged 10 times more than other equipment and needs a TL14 planet or Repair Bots to fix. SG ship variants (like Asp SG) usually hold one by default so you should not use your Sapper against these at all, Sniper Gun is equally effective while use less energy and make much less heat.

Anti-Sapper equipment detection implemented at the first hit with Sapper on the target, so will not auto switch to Sapper against that target once revealed.

There is a Sapper Nullifier equipment in TL15 worlds if HardShips OXP is installed which negates the bonus damage of Sappers, reducing it to 1x level: so the Sniper Gun is two times more effective against a Nullifier even at point blank range. Cost: 30,000₢

Buy this primable equipment for 6000 credits then you can switch your Sniper Gun between Sniper and Sapper mode when activated. You must wait 2 seconds before the other weapon will be ready. You get this equipment with Sapper weapons for free, but you must fix this if Sapper Mode gets damaged - else you can use Sniper mode only.

The mode ('b') key can set auto, preset, target distance, heat or manual Sapper modes. In auto mode Sapper switches back to Sniper either if the weapon is too hot or the active target is too far for the Sapper. It is activated again if cooled down (needs only a few seconds) or you run near to the target. Sappers revert to Sniper Guns when the alert condition changes to green or docked.

Has 1 forward and 1 aft Sniper Gun. 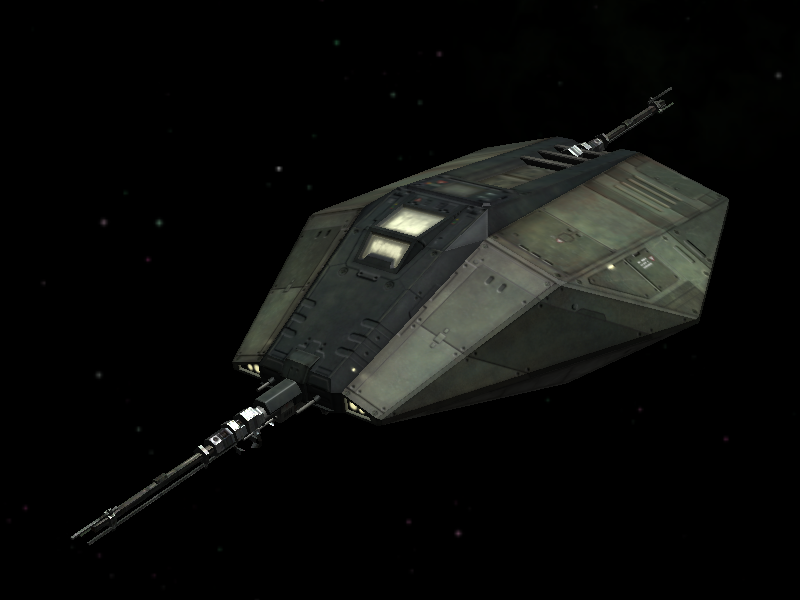 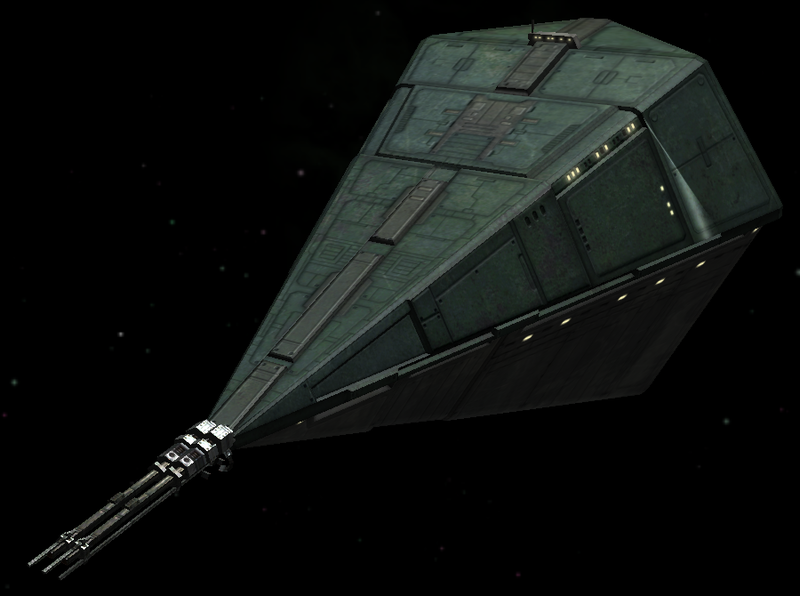 Has 3 Sniper Guns, not separated. 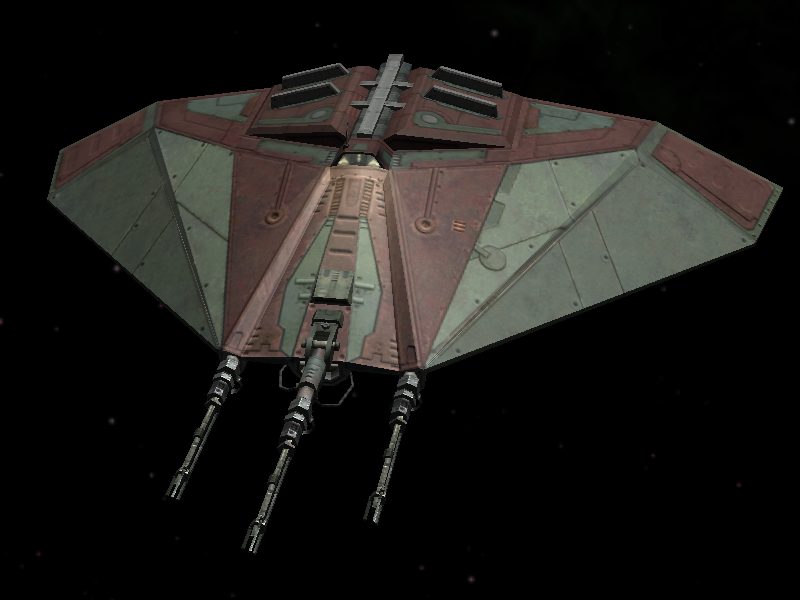 Use 4+4 separated Sniper Guns both in front and aft view! 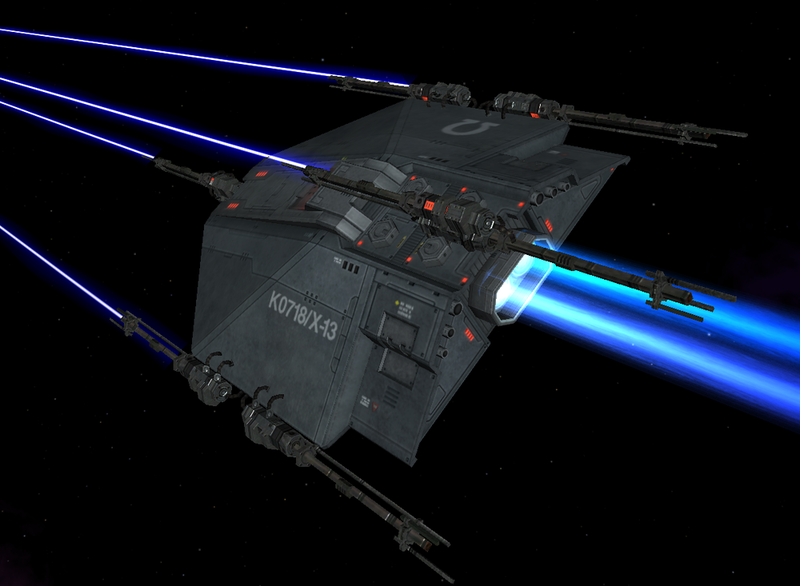 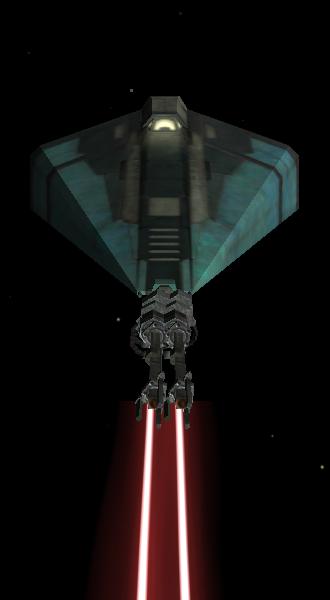 Has 3 separated Sniper Guns! Available in shipyards for the player. 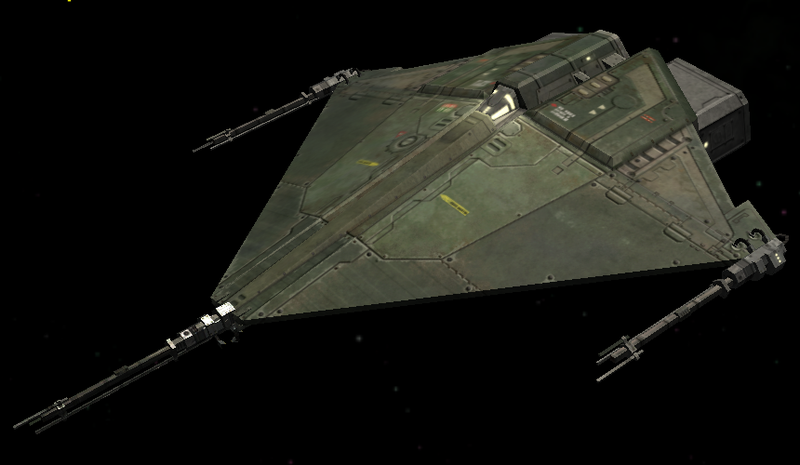 Griff's Prototype Boa contain a Heavy Sniper Gun over the nose and 4 turrets around the ship. 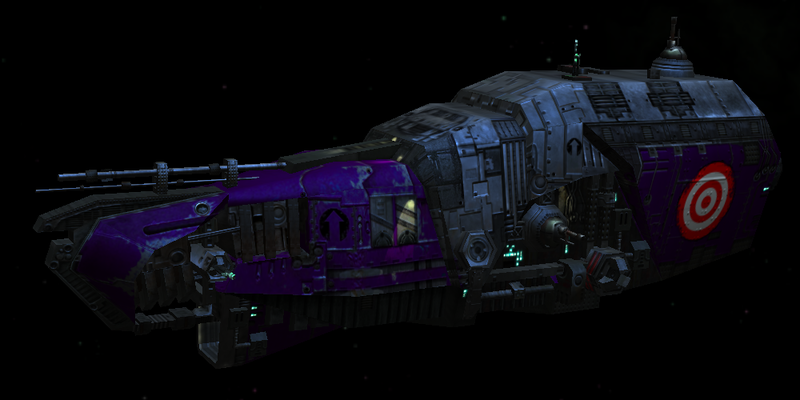 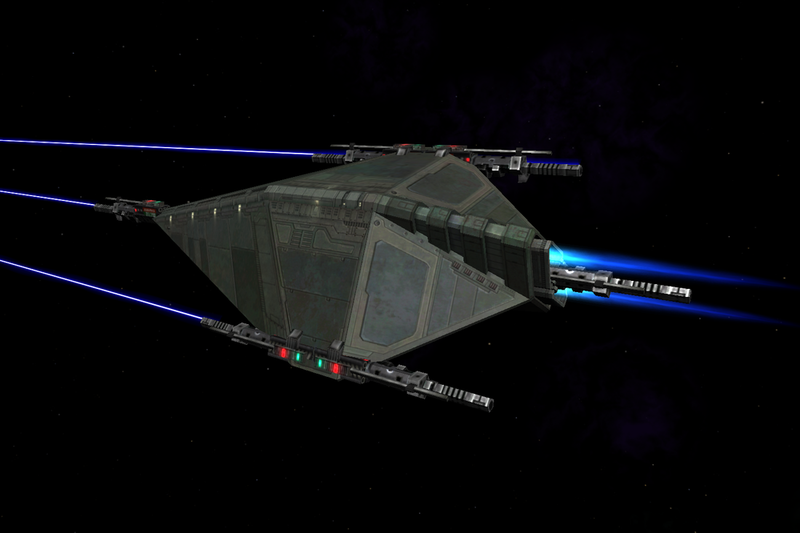 Equipped with a single Sniper Gun. Available in shipyards for the player. 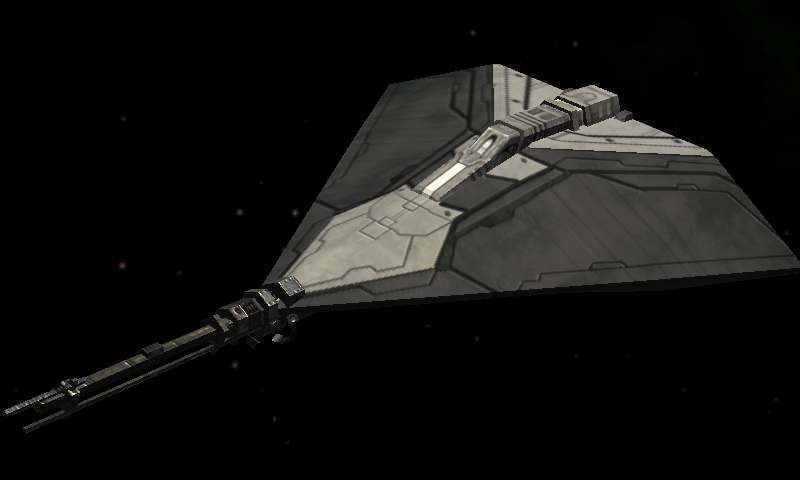 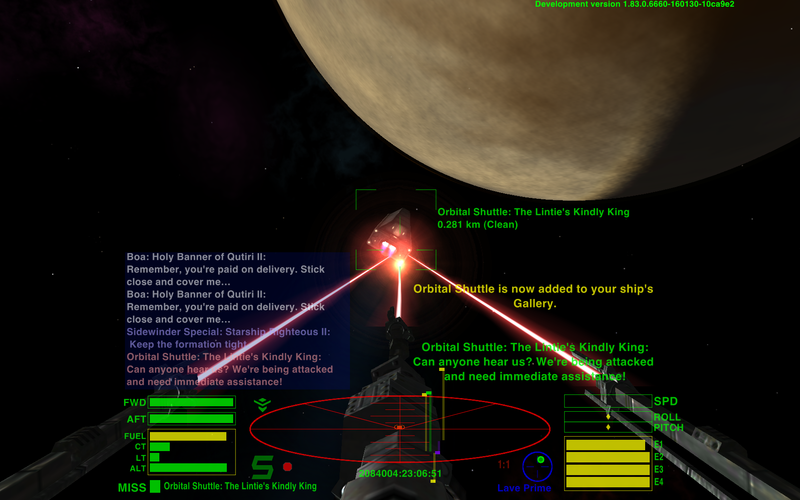 Ship builders can use these gun models on any ships or even make different lookout and allow to mount Sniper Gun if a "snipergun-dummy" subentity is added into the ship.

There are 3 model variants in this package: "snipergun" is the central weapon, "snipergun-l" and "snipergun-r" could be used in wingtips.

If you make a new gun subentity and want to be usable for Sniper Gun then name the datakey like "snipergun-yournewgun". The condition script allow usage of sniper guns in any subentity which start the datakey with "snipergun". If your gun is really big and your ship.mass is over 250t then you can use "snipergun-heavy-yournewgun" which can hold Heavy Sniper Gun.

For aft guns you must give orientation="0 0 1 0"; (so design to forward looking and rotate in shipdata.plist like in Asp SG) else the condition script will not allow to put sniper gun into the aft mount.

Side mounts are not usable for sniper guns at all.

Asp SG use the following lines in shipdata.plist:

The orientation within the second subentity is set to "0 0 1 0" which turn the gun backwards for the aft mount.

Boa SG and Fer-de-Lance SG use "snipergun-l" and "snipergun-r" models to make a Twin Sniper Gun:

Ships like Prototype Boa with custom gun models must use a "dummy" subentity to tell to the Sniper Gun equipment condition script that the usage of Sniper Guns is allowed in this ship.

Python HSG has separated heavy guns but this need at least 100m distances in 3D between weapon positions. The horizontal width of the ship is 74m only so must use a shift in z axis to get more than 100m diagonally, this is why the third numbers are not equal in the last two weapon positions.

You can install Sniper Gun Rebalancer OXZ package. This will reduced a weight of roles NPC-ships to 5 times lower (20% from basic), but will added ships with sniper gun from other ship OXPs.

Also this addition will:

Gun model made by Griff, Textures and fragment shader are from Iguana in Staer9's Shipset.