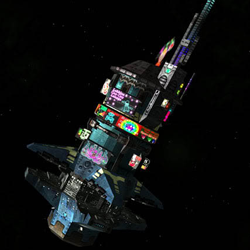 Constore
This OXP is currently broken, i.e. it does not work with the current release of Oolite. Reason: This OXP uses pre-1.79 versions of AI which may well prove buggy nowadays.

Escort missions offered at Pi-42s (in version 1.6 at all constores) plus a new cargo hauler for players and NPCs.

Tired of zipping from station to station in 2-3 minutes? Remember those relaxing flights trapped behind one Anaconda after the other? Remember before you knew tricks like fuel injection and avoiding trade lanes? Has your gaming experience become as hurried and stressful as everyday life? Now you can earn your Credits while rediscovering the joy of Oolite played as a space simulator!

Due to their wage policies the Oo-Haul Corporation is constantly struck by strikes among their escort pilots. You can profit from this! The Oo-Haul emergency contracts (which were originally made to deal with the event when escorts got lost in witchspace) pay scabs a lot better than what the corporation could have gotten away with, had they not upset the unions. And space being a really hard place to stage a picket, the unions voted to go Zero-G Bowling instead of even trying.

The randomly (20% chance) offered Oo-Haul escort missions in this OXP are best played with some nice music, a good cup of your favorite drink and a lot of time. Prepare to use about an hour in flight if you accept an Oo-Haul contract. Oh, and do remember that these are escort missions and as it is in the security business, the endless minutes of quietly watching the monitor may suddenly be interrupted by red hot action. And then again, they may not.

Oo-haul missions may be played any number of times. The presence of a Pi-42 Clerk near the witchpoint is the hint to a mission being offered in the current system.