Station-bound traders are often headed in the same direction as the player and as such can contribute to some of the most time consuming and tedious mass-locks in the game. Slower traders take less time (and/or fuel) to overtake and therefore result in more tolerable mass-locks.
•The green box highlights that there is already a discrepancy for the Cobra mk.III between player speed (0.35 LM) and non-player speed (0.3 LM).
•The yellow, orange and red boxes highlight the difficulty that many slower ships than the mk.III can have in escaping mass-locks.
From Redspear's analysis of Masslock (2017)

Masslock is the disabling of the Torus Drive by the presence of mighty mass (not an asteroid or Rock Hermit, but rather a ship, or something "massier") in the vicinity. It is an inheritance from Classic Elite. Since this is the fastest method of travel within a star system, masslock can slow travel down greatly.

This is not to be confused with the negation of witchjump/hyperspace jump due to proximity to a massive mass such as an orbital station, planet, star or a moon. It is easy enough to do, because the massive masses inhibit both!

In classic elite you would fly from the exit of the witchspace tunnel to the planet. No beacons. The ships you would bump into would be coming in the opposite direction - except for stationary asteroids & rock hermits. You would be thrown out of Torus Drive and would have to decide whether to flee, fight or ignore the oncoming ship.

In Oolite, the picture is more complex because now you have many ships heading in the same direction, from the beacon to the station. And the masslock with people heading in the same direction takes longer. This is logical and makes sense. But there are also many more ships heading from the station to the witchpoint. This is increased if you have OXPs placing stations (Feudal hunting lodges, Monasteries of St. Herod, RSS stations, etc) near to the witchpoint, or have liners with escorts, or convoys traveling between the witchpoint and the orbital station.

There are, of course, two perspectives. What makes sense from a real life perspective ... and what is fun in a game. the fact that the increased traffic from the witchpoint to the station makes sense, does not mean that you enjoy getting stuck in traffic jams when you play the game!

The simple solution in the Vanilla game to the traffic jam is to avoid it! When you come out of the tunnel, immediately turn away from the planet at a large angle and whizz along for 10-20 seconds until well clear of the traffic lane. Then make your way to the planet, keeping well away from the traffic.

Your Torus drive is an anomaly. Yours is the only ship in the game to have one! This is one of the handful of advantages that you as a player have over the NPCs in the game. To manage anything similar, the NPC must use fuel injectors, burning up precious quirium fuel. 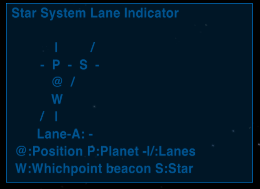 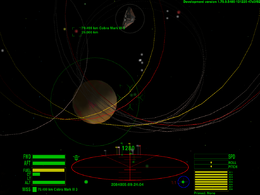 There are a number of OXPs which have been written to try and ameliorate the joys of masslock:

eg: Three major determinants in terms of mass-lock duration are