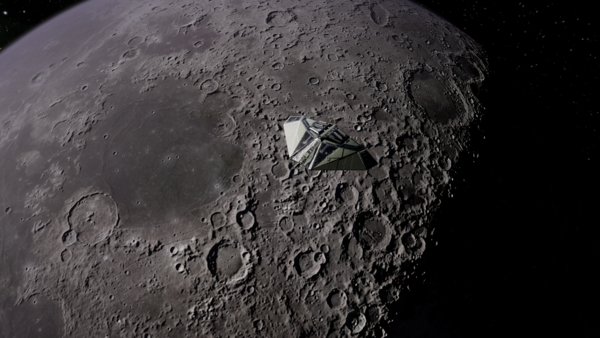 This OXP converts Leesti to the Moon. It uses 8192x4096 textures for diffuse and normal maps.

One of several OXPs exploring the new planetary graphic capabilities of Oolive v.1.90

Changes made to original diffuse map include reducing max lights value from 255 to 192 (there are too bright spots on original map) and correcting light curve to reduce overall brightness (input value 136, output value 120, repeat two times). Changes made to original normal map include the addition of an alpha channel, a swap of red and green channels and inversion of original green channel (thanks to another_commander for these valuable details of normal map processing). Polar distortions on van Vliet's normal map were patched using normal map, generated from CGI Moon Kit displacement map. Comparing with van Vliet's normal map this normal map has too soft shadows with loss of small terrain details, so I used it only to correct polar distortions in zone approx 90°...80° latitude. There are still some polar distortions remaining on normal map, but most of Moon surface now seems pretty cool.

You are free to use and distribute this OXP on non-commercial basis. Rebundling of this OXP within another distribution is permitted as long as it is unchanged. Any mods/derivatives of this OXP must be distributed under another names. The license information (either as this file or merged into a larger one) must be included in the OXP.

Good things and bad things end up balancing each other out.