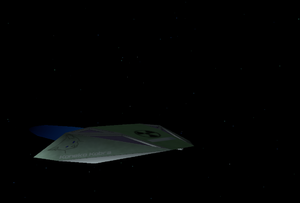 The Koneko Kobra, designed and built by Koneko Industries, is a variant of the standard Cobra Mk3, and the first ship in the Koneko Kobra line of light traders/combat ships.

Sacrificing two missile slots and five tons of cargo for extra speed and energy (among other minor benefits), the Koneko Kobra is prepared for any pirates.

The first Koneko Kobra, Taylor Miller, started out as a standard Cobra Mk3, before Ryan Hoots, CEO of Koneko Industries, completely rebuilt her engines, replacing the two standard Cowell & MgRath thrusters for one big prototype engine from his company in the process.

The Koneko Kobra has become a symbol for the company recently, as it is their flagship line of ships.

In Koneko Industries OXP version 2.0, new alternate versions of the ship will be for sale. The blue version will be about as common as the standard Mk1 Kobra, while the rainbow and gold versions will be slightly rarer and much rarer, respectively.

The Koneko Kobra Mk2 was created when Commander Hoots wanted to improve Taylor Miller further, using Thargoid technology. The Mk2 was a failure, but Koneko Industries' engineers were able to salvage the ship design before Hoots started work on the Mk3.

The Koneko Kobra was designed specifically to fit the needs of Ryan Hoots. Still within the power range of most core Oolite ships, but designed for the bounty hunter who favors the laser over missiles or plasma guns.

The ship's single engine is a Koneko Industries original design, made for speed and reliability. The ship's maximum is .4 LM. However, the single engine takes up more room than two of the standard Cobra engines, so cargo space is lost.

This ship is part of the Koneko Industries OXP.