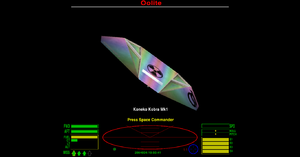 Version 2.0 will include many new textures for the existing ships, including the Rainbow and Golden variants of the Koneko Kobra Mk1. Other planned changes include a player Massasauga, adding plasma cannons to the Takina Class Cruiser, and pirate versions of all ships that do not have one already (such as the Massasauga and Takina Class).

The original version (1.0?) may have included a "Stretch Adder" which is now missing (see Wayback Machine link, below).