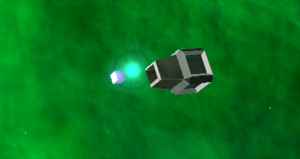 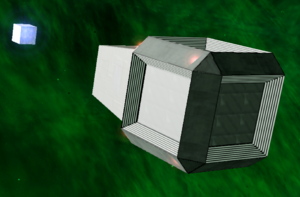 A small tester/demo OXP concerning larger turrets/cannon weaponry, and the feasibility for "dumb" cannonball type munitions in the game.

Features a static space-born police cannon ship, which will lock onto targets (aliens, pirates and fugitives, plus anyone committing offenses within its range) within a 15km range and attack them. It fires energy bolts which damage on collision (see Comments, below). For a given "value" of attack, as at times it has problems hitting the broad side of a dodecahedron station!

Note that they do not (yet) check whether anything is in the way between themselves and their targets, so don't get in the way!

Included is a small populator script which will add a turret into interstellar space encounters when Thargoids are present (force a mis-jump to see), or alternatively they can be spawned with the Debug OXP using the role "goliath_turret".

the conversion of files between XML and openStep.
the merging of files with other files of the same type from other OXPs.

As this is a demo OXP the concept and methodology is free for anyone to use. It is a little delicate concerning launching (collisions between the turret and the bullets) and the stats of the bullets themselves, so beware if you're making adjustments.

Also as the bullets physically crash into the target (when they hit), it isn't possible for them to do damage directly other than small collision damage. The use of the normal missile damage methods do not work as the bullet is dead by the time the AI gets to that stage. Hence in the scripting the collision spawns a secondary entity (the explosion) which is repositioned to the target and that then does the energy damage like a normal missile. A little convoluted, but the only way to inflict damage properly to NPCs and player ship.

Unzip the file, and then move the folder "Goliath.oxp" to the AddOns directory of your Oolite installation. Then start the game up whilst holding down shift until you see the spinning Cobra MkIII screen.

Due to the script commands involved, this OXP requires Oolite version 1.74 or higher.