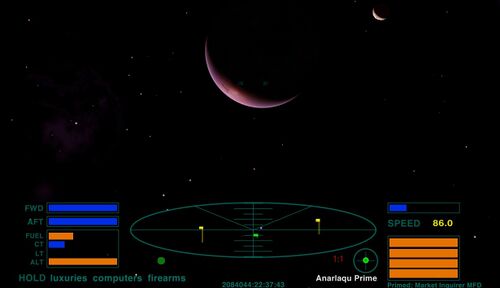 FE Shipyards is pleased to bring you, our valued customer, the only HUD in the inventory made by Guilders for Guilders.

Our goals in designing the GETter HUD were quite simply to be quiet in tone, minimalist, unobtrusive, yet functional. It is a HUD eminently suited to peaceful trading rather than belligerence or deep space slaughter.

GETter HUD's most notable feature is the display of your vessel's hold contents, along with a digital velocity readout.

We expect our customer-base for this product to be running with weapons offline. Should you toggle weapons on, a large red "W" will illuminate at top left of the scanner, primarily as a reminder to toggle them off again. 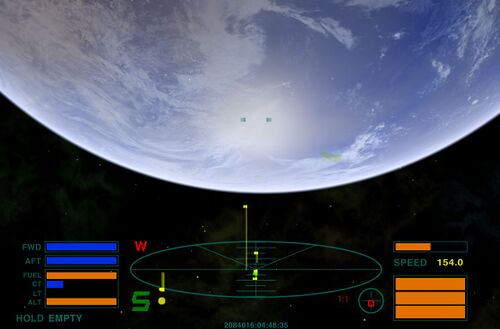 Oops - someone's left her weapons online, even though she doesn't have any! - GETter HUD version 1.2.

GETter HUD version 1.3, showing the new line with shipowner, ship class, ship name, and ship tonnage above the scanner, plus goods quantity carried, below the scanner. 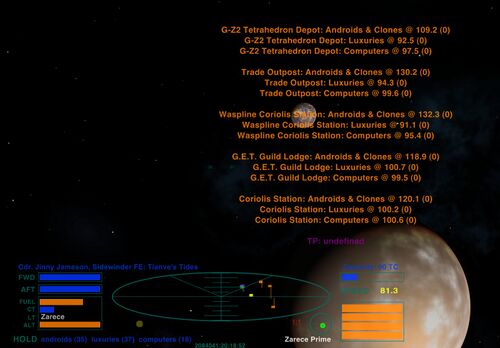 In case you prefer the previous version, it will always remain available as an OXP here. Just unzip to Oolite->AddOns.

GETter HUD 1.4 OXZ download - the only HUD in the inventory designed by G.E.T. Brothers for G.E.T. Brothers, showing digital speed and cargo hold contents in place of missiles. BB thread