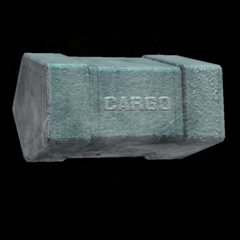 Simple organic products. Not per-se edible by humans but it usually is.
Rumour has it, that Soylent green is made of people, which is of course ridiculous.
Everyone knows people wear clothes.

Traded in TCs (Tonne Cannisters) & stored in the Cargo Hold for trade.

Dirt cheap on agricultural worlds, and (relatively) much expensive at industrial worlds: an inexpensive product.

Cim: Let's assume a 1TC barrel of Food contains 1000kg of food, or approx 500 person-days of food. A Boa will bring 125TC, and lets say 2 or 3 arrive each day carrying food rather than other goods. So they're only importing enough food to feed a couple of hundred thousand people at most. We can probably pretty safely assume then that the Food cargo is generally luxury food, interstellar delicacies, and the like, and all planets are usually self-sufficient for basic food needs. The NPC bulk haulers (eg HammerHead) could raise it to a couple of million people, perhaps, which is still negligible.