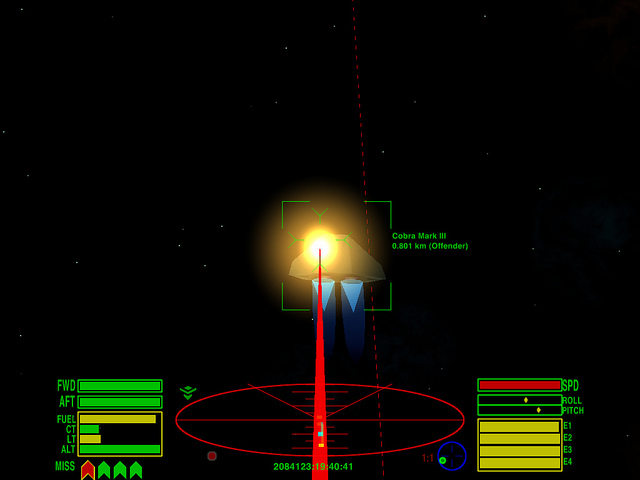 CommonSense 'Outside-the-Box' Design Studios Ltd. is happy to bring you the long awaited realization of shield flasher and damage effects to Oolite. As well, in this oxp is the first realistic forward/aft shield simulation for the npcs that works nearly identical to that found on the players own ship and which offers a new mix of balance and strategy to player ship combat, dogfighting in particular. The oxp is customizable for both eye candy and game mechanics. Compatibility and balance with other oxps is therefore insured. Have it your way and enjoy.

See more description and screenshots in this forum topic.

A brainstorm happened to me in the first week of August 2012 and after taking a modified NPC-shields OXP and attaching some code as a test I realized that it would be possible to use flashers as shield effects without modifying any ships and would be 100% compatible with most oxps. The real challenge was using vectors, as I used to suck at them, but now I have a little understanding.

The other thing I realized only a few weeks later was how to give a more 3-D feel to the effect by adding flashers to represent the tunneling of lasers through the shield. It adds a lot to the effect and feel of it. Currently I use vectors to plot the impact point of the attackers laser with the shield and this will improve in 1.77 for accuracy and speed with all the new JS commands. The direction from the player's ship to the impact on the player's ship is used to position a shield flash effect so one can see the flash of impact as well as the normal tunneling effect.

When the shields are down, hits on the hull produce sparks and even blown panels occasionally. Rarely, an unprotected hit can produce a visible ship damage effect to both player and npc. This part is still a work-in-progress with 5 or 6 effects still to be completed. Still, one is included that works reasonably well. This is a fuel leak caused by a hull breach with a visible venting of a dull blue gas from the ship of which some can be scooped by player or npcs. This was created with flashers as well. Anyway, this is something to play with until all the other damage effects are finished.

I know a lot of people have been wanting this for a long time and I was tired of waiting so here you go, enjoy, and have fun!

spara, JazHaz, Shipbuilder and Commander McLane for playtesting, comments and posting results on potential bugs and other issues, many thanks.
Thargoid for suggesting to use the shipAttackedByCloaked event.
Eric Walch for a good scripted cargo example in Cargo Wrecks and teasers.

The following derivates however are permitted and except from the above:

The shields awarded to the NPCs make them much tougher - but this is tweakable.

Done. Now the game is back to its original balance (and the visual effects are still present).

The awarding of shields to NPCs makes them much tougher in combat (but the game more fair!).

To change this, see Tweaks above