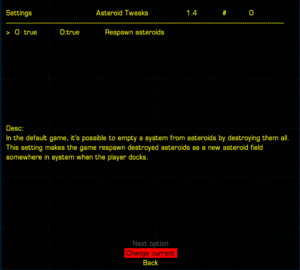 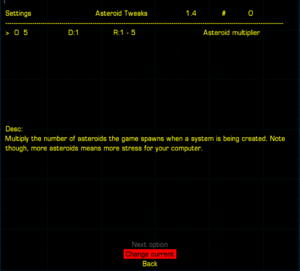 When populating a new system the core game spawns a random amount of asteroids and while being in-system, no new asteroids get spawned. This oxp adds two features. It allows you to control the number of asteroids spawned and implements an asteroid respawning functionality.

Control the number of asteroids spawned at system population by setting a multiplier that multiplies every spawned asteroid. Multiplication factor can be selected from range 1-5. Note that multiplying asteroids means more entities and that means more stress to the computer.

2. If after the 1. step there are asteroids left to be respawned, a random asteroid is chosen far enough from the player and the rest of the missing asteroids are added back as an asteroid field.

3. If the 2. step fails, rest of the asteroids are scattered around far enough from the player.

Silent Asteroid Tweaks is a more immersive add-on by Phkb, moving the interface screen to be accessed by the Config for AddOns heading on the F4 page - you will also need Library.oxz loaded in addition to this original Asteroid Tweaks.