Just to say, I've bunged a couple of your Resource Pack pods into the images gallery on the Escape Pod page.

By the way - have you ever tried contacting Charlie? I've seen his 2006 e-mail a couple of times dotted about the place. It's a shame he never finished his black hole! Or maybe he did and got swallowed up...

Feel free to use my images anywhere you like, they are not limited to "my" pages.

I never tried to contact Charlie, he never showed up for too many years. Thinking about his OXP's I better finish his WIP myself, he is even more "Ueber" than I am. :D

I wonder if we could lure Mandoman back. I had a natter with him by "pm". This really the only game that he has ever played, and the constant criticism of his über-oxp's (and his inability to programme the AI's needed to make his fleets work) really put him off.

Oh - and I really wish we could lure Dybal back. Goodness! He was brilliant...

Mandomans fleet is ueber, significant stronger than the core-ships but so are my ships. I guess nowadays the acceptance will be much higher. His designs are very creative, not all of his textures or models are my personal taste, but I do appreciate his work.

In short, having him back in the team would be an advantage. Dybal was great but I doubt we will ever hear from him again.

I feel that some of the more exciting but beta oxp's should go up - to tempt others to finish them, or cannibalise them for their own projects.

Z GrOovy HPC pack (2014) Dertien's Cobra & Sidewinder with landing wheels and other bits you can shoot off! - as discussed yesterday...

If I create the page would you be willing to fill in the gaps, please?

Sure, if I can access the code I could complete the wiki pages, maybe even finish or rewrite the OXP's. 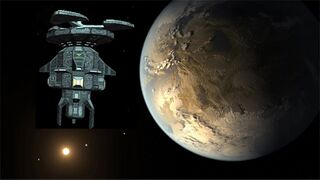 Thank you, like many times before I was actually looking for something different but this picture seemed to fit perfect for the Nephthys. 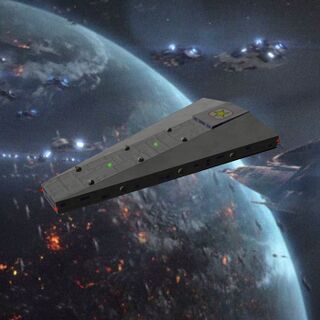 It just exudes the possibilities of adventure! Your current batch of pictures are just redolent of transcendence regarding the current limitations of Oolite.

Thanks again, this background just seemed to fit a Navy Frigate.

Just seen your new and striking shot of the Ghost Gunship. I just wanted to say "Thank you" for your work in resuscitating these oxp's. The fact that I'm not into them myself is irrelevant to the much more important fact that you are doing this work and keeping these ships alive and relevant. Again, "Thank you!"

No need to thank me, while some ships are not exactly my taste either, I think they should be part of the collection.

I am currently in the middle of finishing my long list of pending OXP's rather than making all the time new ones. My main idea remains to be a new version of Dictators, with HWG included, but that will mainly depend on phkb, he is in charge of this OXP.

Church of the Holy Witchspace Guard

I'd like to expand on this so that I can start creating temples inside the orbital space stations! Your text from the thread is this:

As well as these five systems, there are also a number of independent countries on dis-unified planets (eg. Confederacies, Multi-Governments & Anarchies, and a handful of Duchies/Baronies on Feudal Systems who identify with the Church - not to mention individual worshippers in the democracies and feudal systems.

The Church is devoted to purity - the purity of the worshippers and the purity of Witchspace. To be pure one must know what purity is and how to attain it - hence the emphasis on education. In the religious academies this leads on to education in religious dogma to convert the ignorant, and in some academies to tutoring in space combat against the Thargoids. The Thargoids pollute space with their peculiar space drives and must be eradicated. It is rumoured that the temple at Veis is collecting data about Thargoid appearances in order to predict future incursions.

The inner sancta of the Temples are naturally only open to those who are pure. Purification for a service involves ritual bathing, censoring with incense, prayers and silent meditation. the peculiar appearance of the church's temples and ships is tied in with this purity.

Since the expertise in fighting against the Thargoids also translates into fighting against pirates - or other invading systems, the church advisors to other system governments are usually there in a military guise.

Montana05: is the above acceptable?

Great job, if you somewhere include the point that the advisers act as spies and influence the decisions of their employers to benefit the church we are nearly there. :)