This Oolite Expansion Pack (OXP), developed by Smivs, adds 'YellOo Cab' Taxis to the Ooniverse. These will often be seen ferrying passengers around and between systems, and the YellOo Cab is also player-buyable. 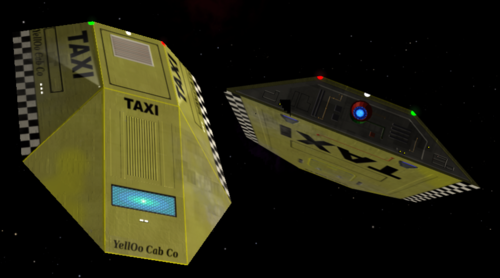 The Retila Shipyard Co-operative (RSC) is a shady organisation consisting of various Mafia, Triad and Pirate groups, who were brought together by the legendary super-criminal Kran Hoftus to build and market the notorious 'Contractor' uber-ship. Although the ship is not illegal, GalCop is well aware of the Shipyard's dubious ownership and is known to monitor the situation closely. As time passed RSC realised that they would benefit from having a 'legitimate' business arm to maintain an air of respectability and of course for money-laundering and other nefarious purposes.

However, no one in their wildest dreams would have expected them to start manufacturing Taxis, but that is exactly what happened. The RollyJoger TaxiWorks was established to manufacture the Contract-a-Cab after the RSC (somehow!) won the contract to build a fleet of luxury Limo-Taxis for the prestigious YellOo Cab Company. Also surprising was their decision to use an adapted version of the Contractor spaceframe as the basis for their Taxis, but this actually made a lot of sense, as the ship was the right size and shape, all the development work had already been done, and it turned out to be both very adaptable, and ideal for cost-effective mass-production.

Of necessity the specifications are very different. Gone is the expensive organic hull plating in favour of Duralium. The three Muon-Schism drives have been replaced by a single Quark-Oscillation engine giving a top speed of 3.6 LM. The Contract-a-Cab has three Energy Banks with a 'medium' re-charge rate of 3. Two missile slots are fitted.

The Ship comes as standard with the basic equipment needed to perform its role, with standard Escape Capsule, Fuel Injection, Fuel Scoops, Heat Shielding, forward Beam Laser (and a rear mount), and of course a special luxury Passenger Berth which also incorporates a passenger Escape Capsule. All other equipment options are available. The Contract-a-Cab has NO hold or cargo extension available. The Passenger Berth is an integrated aspect of the design and cannot be removed to release cargo space. The Cab has two escape capsules, so in the event of an emergency both pilot and passenger are safeguarded.

For anyone looking to operate a YellOo Cab Co franchise, the Contract-a-Cab will excel at providing a safe, comfortable, reasonably fast and reliable means of plying your trade. Base price is 275 450Cr (including 100 000Cr GalCop Taxi Licence fee)