This Oolite Expansion Pack (OXP), developed by Smivs, adds the Contractor Mk II to the game. This ship occasionally appears in the game as a Bounty Hunter, and rarely as a Pirate. The Contractor is player-purchaseable. 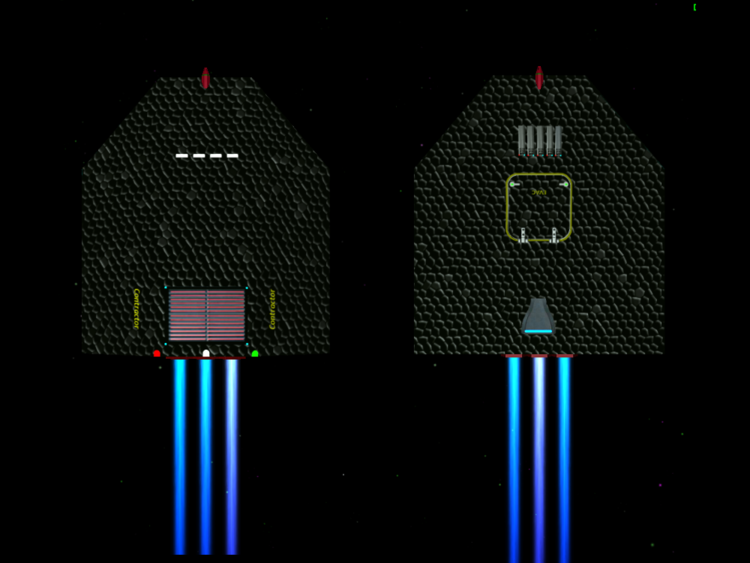 The Contractor is an extreme example of niche-marketing, specifically targeted at Bounty Hunters, Hit-Men and Assassins, and it is without doubt one of the most lethal ships ever conceived. Inevitably a few have also found their way into Pirate hands.

The Contractor is shrouded in mystery, and little is known about the ship, its armaments or its capabilities. They are thought to originate on a moon orbiting a planet in the anarchic Retila System in Galaxy 2, where it is believed an unholy alliance of Mafia, Triad and Pirate groups have established a covert shipyard where the Contractor is built to special order, drawing together stolen technologies from across the Ooniverse.

Even less is known about the origins of the design, although the story goes that it was reverse engineered from a stolen Military prototype. Although the incident was hushed up at the time, it is common knowledge that a Top Secret prototype was stolen from a Naval Base in Galaxy 1 and soon after was taken to Galaxy 2. It then disappeared for a few weeks during which time it is thought it was stripped down and examined in detail. What happened next is unclear but the prototype was eventually tracked down and destroyed by a keen young Jameson, out to make a name for himself.

Standard equipment is rumoured to include Front-mounted Military laser, ECM, and Fuel Injectors, and all options are available, although the 2 TC cargo capacity cannot be expanded. The Contractor features a unique HUD with a clear, combat-biased layout. Unable to reproduce the Naval drive unit fitted to the stolen prototype, the builders instead opted for three Muon Schism drives from the MitsOobishi Motor Company based at Xevera in Galaxy five. These compact yet powerful engines give the Contractor a very respectable top speed of 0.45LM.

The Contractor is believed to have some limited stealth capability thanks to organic hull plating developed by the Marine Trench Company making it almost invisible to the naked eye, although most scanners will detect it. Bounty Hunter ships will often be fitted with Cloaks and Scanner Jammers.

The Mk II has been refined even more into a combat vessel sacrificing all but two TC of cargo space to add two missiles over the original ZZ1 model. Following feedback from users the handling has been improved and the notoriously 'twitchy' controls have been smoothed out for the Mk II.

Although extremely rare, any Contractor that you might encounter is well worth avoiding, particularly if you are an Offender or Fugitive...remember, this is the ship-of-choice for some of the most ruthless and dangerous men in the Ooniverse, the Bounty Hunters. Contractors have awesome firepower, most will have Military shields and energy units, and they are amongst the fastest ships available.

If you can afford it, you can own a Contractor, and occassionally one will be found for sale at ship-dealers on higher tech-level worlds.

This basically means that you can do what you like with it... it's yours to play with as you see fit.

The OXP was developed by Smivs. Many thanks go to Commander McLane for writting the Bouny Hunter JS, and to Thargoid and Zbond-Zbond for help, advice and inspiration.

Available via the in-game manager, or download from the link below.