This OXP contains two ships: the Vortex & the Maelstrom 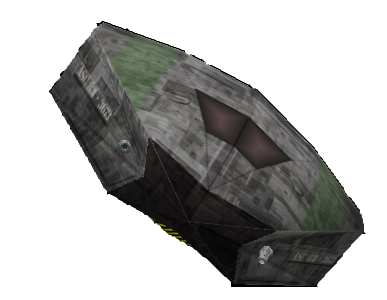 The Aquarian Shipbuilding Corporation's Vortex is a rare but fearsome beast. Originally designed as a military blockade runner, it combines an excellent cargo carrying capacity with the speed and muscle to cope with most trouble it may encounter. With the cooling of the Sector Wars some of these ships have been demobilised and made available to the private market (with a few of their more lethal features removed, but many desirable ones still in place).

Having a military heritage, they won't feature in any glossy ship brochures or magazines of beautiful craft, but they have a heart of titanium and an ass of finest iron. They are all about function over form, and they combine a powerful punch, a heavy hauling ability and many advanced features which cannot be found in any other ship available on the civilian market.

The multibay cargo system switching screen is accessed by going from the manifest screen to the marketplace screen (F5-F8 whilst docked, F5-F5-F8 whilst in flight). When docked the cargo bay screen is displayed by default, whilst in-flight the missile bay screen is instead (they can be reached from one another). To aid usability the time acceleration factor is used to slow things down whilst the screen is open in-flight.

The missile bays can also be cycled through by using the "select next missile bay" item on the equipment screen (to aid in rapidly equipping the bays). And if the final pylon is used whilst in-flight, the MAC will automatically select the next bay with equipment in it so leave the pilot to concentrate on combat and flying.

All other items are automatically handled by the MAC, and do not require any intervention from the Commander.

It should be noted that if you fly either of these ships and scoop escape pods, cycling the cargo bays will of course load those pods into the system. As this will effectively take them out of normal space, the link between the pod and the system-wide communications network is broken. This has the net effect that the pod can no longer report its status back to the insurance company's net, and so the pod is deemed as lost.

The overall effect of this is that bounties and insurance credits for passengers in such pods are lost (although they can of course still be sold as normal slaves). If you have a particular need to cash in on such a bounty or insurance (for example for a specific mission) then the cargo bays should not be rotated whilst the escape pod is aboard the ship.

These craft were not produced in large numbers, and many of those are either still in military service or have been lost to combat. But they do appear in civilian hands (as traders, bounty hunters or combinations of the two), plus they are sometimes used by GalCop security forces. It is not unknown for privateers to use these formidable vessels when they can lay their hands on them.

Their normal price tag is around 2 million credits, and they usually only appear in the most high-tech (level 12+) systems.

This OXP is not compatible with HyperCargo, Military Fuel Injectors, the APRIL system or the system part of Repair Bots. Due to how the cargo bay system works, any additional equipment which requires the use of cargo space also cannot be used.

It also slightly redefines the trunk passenger berth equipment to allow them to be blocked-out from fitting to the ship. This should not cause an issue, but is included here for information and reference.

Both ships are fully compatible with cim's New Cargoes OXP as of version 1.23.

Version 1.20 of the OXP introduces the Vortex's sister ship, the Maelstrom. Cut from much the same cloth, this ship focuses more on hauling capacity at the expense of some of the more offense-oriented aspects of the Vortex (see above for the details). The ship is larger and slower and has lost its turrets and some of the missile pylon mounts, but in exchange offers a 100TC cargo bay, expanded using the Multibay system to an overall capacity of 300TC split across its three switchable bays.

They appear less often on the market than the Vortex, as the military is loathed to part with these tough, rugged and highly capable ships. But some have made it into the civilian market, where they make ideal high-capacity freighters that can hold their own in any star system.