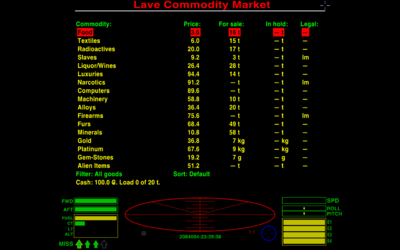 Traders make up the biggest group of ship types in the game... it's time they start getting a little more organized!

NPC ships will appear in more roles, but are typically quite rare in those new roles.

NO NEW SHIPS ARE ADDED!

One is a Cobra Mark-I, the MEDIUM difficulty.
The other is an Adder, the HARD difficulty!

Both only have 100 Credits to spare.

The third one is Adder Broke Start, the HARDER difficulty: no money, no witchfuel, no heat shielding (that's normally standard on Adders), no cargo, and no missile.

NPC ships will...hopefully...behave a tiny bit more intelligently than they do in regular Oolite.
Still don't be surprised if a single enemy pirate doesn't put up much of a fight. It didn't before...and even if it's slightly more likely to have an ECM now, that doesn't make it a good shot with it.

The standard traders that appear around the witchpoint beacon will now have a bit more diversity of behavior -- some heading to the nearest station, others scooping cargo, some actively attacking pirates, and some even hyperspacing back out again.

Some traders may scoop cargo canisters and escape pods along the space lanes.

Cim's junking the commodities.plist, changes to AI and to economics may well have broken this OXP - and brought a number of Switeck's changes into the Vanilla game. This OXP was written in 2010-2.