Modelling 101: Spreading the Wings of your Mind

Modelling can be daunting: you start with a blank piece of paper (or in our case a blank workspace in our computer's memory), upon which you hope to create something wonderful. Something earth-shattering. Something never before seen. Something that will take the world by storm and make you famous. Something ---

Okay, okay, stop right there. Ever heard of "writer's block"? Well I have, and as a writer I know from experience that the above is a classic - if not the classic - way of developing it in a hurry. You set up expectations and goals for yourself, and eventually panic sets in and what used to be fun stops being fun, and oftentimes ends up being impossible. Let's backtrack a bit - no, let's start again.

Modelling can be daunting: you start with a blank piece of paper (or in our case a blank workspace in our computer's memory), upon which you hope to create something wonderful. But don't worry if you don't! (There's the key.) Don't worry if you can't, either. In fact, don't worry at all. Worry creates stress, and stress reduces your fun level, and if you're not having fun, or at least enjoying yourself, then maybe you need to take a break, or go and watch the trees for a while.

If you're expecting or hoping me to tell you that modelling is easy, either, then I'm afraid you're in for a disappointment. Modelling isn't easy: it's like any other form of art inasmuch as it needs to be worked at, practised, honed. And you need to recognise when something is a masterpiece and something is a practice piece (guess which you have more of; no prizes, either) - which will come with time.

But with both those caveats in place, let me state categorically that I think that modelling can be fun. Is fun. I enjoy modelling a heck of a lot - in fact, I enjoy it so much that I'm writing these articles to help others to find it as much fun as I do. Frequently I'm frustrated, annoyed, fed up and swear I'm never going to build another model, and I don't - for a while. But I was bitten by the bug way back in 1997 and I haven't been for treatment yet...

Still here? Good. Still reading? Even better. Still want to make models? Splendid! Now that we've had "The Talk", let's get on.

For this tutorial, I'll be using the 3D modelling package Wings3D, which you can find here. It's a very powerful piece of software, despite the fact that it's completely free. (Or because of; I'm not sure, you decide.)

When you build models for yourself, you'll need at least a rough idea of what you want the finished artefact to look like or to be able to recognise it when you see it. That latter skill tends to come with practice, though.

Welcome To My World 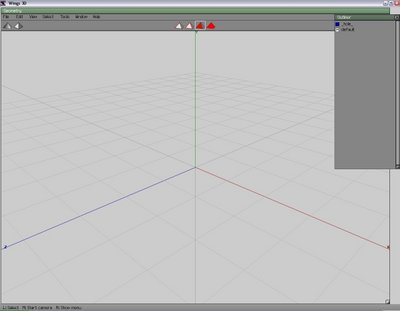 The first thing you'll need to do is to download and install Wings3D. When that's done, run it. You should see a screen that looks something like the image shown on the right.

If you have a small window on the screen titled Outliner, feel free to ignore it for the time being. If not, you can ignore it later.

The main section of the Wings3D environment is the Geometry window. This is where all of the design work for the shape of your models will take place.

Notice also the grid lines extending around the origin. These are there to give an indication of size, and are set at 1 unit intervals. In terms of modelling for Oolite, each full square counts as 1 'oolometre', 1 metre of dimension in the game world.

You may have observed that three of the grey grid lines, the ones that begin at the origin, are a little darker grey than the others. These are to show that they are continuations of the X, Y and Z axes on the negative side of the origin.

Get Up, Move Around A Little 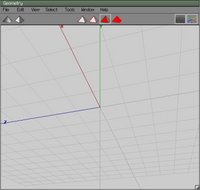 Play with moving the world around a little. When you've had enough, click the LMB to steady things up again.

Uh-oh. The world's got its knickers in a twist, and that's not where we want it be right now. Not a problem, however: press R and the view will reset to its original position, with the camera looking down at the origin.

You can always press R to get this view. It's a useful key to remember.

Move Around A Little More

Click the MMB again to free up the camera and move the view away from its starting position.

It's often useful - if not downright necessary - to be able to get a closer look at a model. The simplest way to zoom in and out is simply to use the mouse wheel: rolling it forward (scrolling up) zooms in and rolling it backwards zooms out. See how the camera zooms in in regular steps?

If you want a little more control over the zoom, then we really need to dolly. What this does is to put the world on a little cart on a piece of imaginary track so that it can be moved backwards and forwards smoothly. In order to do this we need to click and hold the MMB, then move the mouse up and down. Moving it forwards dollies in and moving it backwards dollies out; moving it from side to side does nothing at all. Have a play with that to get the feel of it.

Moving around and in and out is all very well, but what if the bit of model we want to see is off the screen somewhere?

(I hope you haven't clicked the LMB to stop the working environment from moving. If you have, click the MMB again to free it up.)

This isn't a problem, either. What we need to do is to track the environment from side to side. Tracking is like dollying, except from side-to-side and up-and-down rather than in and out. To make the computer track, press the Q key and then move the mouse. See how, instead of the world turning around and about, it moves as you'd expect it to do, up and down and left and right? Have a play, for a minute.

Now we've moved sideways, we can press Q again to stop tracking (do that, please). Moving the mouse around shows that we're back to turning and rolling about - but wait! The camera's focus has moved away from the origin!

I suppose I've been a little sneaky, but this was as good a way as any other to introduce you to an important truth about Wings3D (and probably about many 3D modellers): the camera is always focused on the centre of the window, not necessarily on the centre of the world. Moving things around now can produce some quite brain-bending experiences: with the origin away from the centre of the screen, the movement is not always as you expect and can take some getting used to. However, we are not afraid: we have the R key. Press it again and continue undaunted.

Primitives and Other Basics