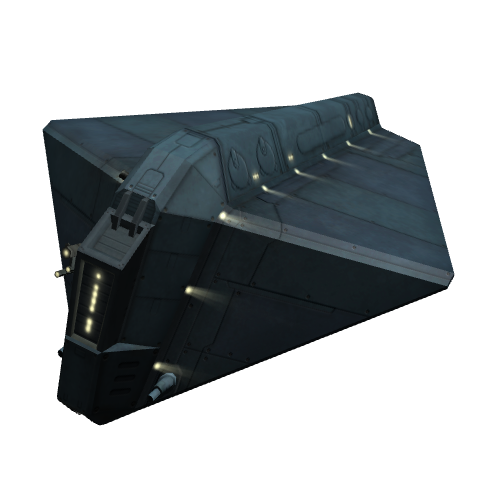 MORAY STARBOAT
Developed initially as a submarine flying boat, Marine Trench Co. soon saw the possibilities for extending their operations into space and the Moray SFB became the "Star Boat" after its ingenious adaptations were completed. Aquatic space-faring races are the main users of this multi=purpose vehicle ...

This rare ship is used almost exclusively by aquatic space-faring races since it is designed for undersea travel as well as space and standard-atmospheric flight. It can withstand depths of up to 10,000 meters, is usually fitted with powerful lights, and though a single missile-pod can be fitted within the hull, two torpedo tubes are usually favoured.
The cabin may be flooded either to act as an air lock or for the convenience of water-breathing crew (the controls are designed primarily for piscatorial digitalia). There are seven tons of empty hold space for bouyancy which may hold cargo during space flight.

3028 Moray 'Starboat' is produced by Marine Trench Co., Earth.
For nit-pickers: note that Earth is left out of the corresponding Oolite timeline!

Note that apart from the Syncretist Timeline, there is no mention anywhere as to where Marine Trench Co. are located - and that Ian Bell's mention of piscatorial digitalia implies that yet another species might exist somewhere in The Eight Galaxies (lobsters and frogs don't quite fit the bill! Although the possible variation in each species ....).