The Llama is a common choice with Escort Jockeys

The Llama is a medium-sized trader vessel, produced as an unlicensed copy of the Griffin Systems ship of the same name (which has never actually entered service with us). It is produced by the Tsierk Letaneya design bureau, within the Communist Hegemony of the Third Gentile Cluster, in the Galileo Sector.

Although never as popular as the older and somewhat more rugged 'Cobra' series from Cowell & MgRath, the Llama offers traders a very reasonable package; with good performance and decent hold-space, packed inside a compact outline.

The Llama's admirable dimensions are, in fact, achieved through the use of a 'catamaran' hull system, which was considered quite radical when the ship was first unveiled in 3110. Its main frame unit consists of a lightweight, but very strong, U-shaped strut, formed from finely spun Buckey-fibres.

By placing the crew and cargo in a separate, central, module - away from the twin engine units - Tsierk Letaneya were able to make use of the extremely powerful, but rather 'dirty', TV101 'Energia' engine units, manufactured by Klimov Corporation, of New St Petersburg, Luna (in the Luna/Earth bi-planetary system, of Old Sol).

This also makes the Llama quite manouvreable - as it places the power units outboard, with the main centre of mass just in front of them, in the middle of the ship. 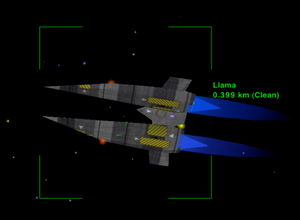 Klimov have many centuries of experience in producing high performance, low cost engine units for the military aerospace industries (as well as the ground-based power units, familiar from their use in the terraforming business).

The Energia features an enhanced version of Prosset's well-established proton-tightening afterburner, using liquid-helium-cooled, super-conducting meson coils to further tighten the propulsive flux. These give off a considerable amount of alpha radiation, and would not be considered suitable for incorporation into a standard hull. By moving them outboard, Tsierk Letaneya have effectively made the radiation "someone else's problem".

The ship also features an extensive array of components sourced from the Communist Hegemony's military surplus budget, including a BARK target recognition system, the 'Monitor' space compass, Serebrany-Lantseer Energy Deflection Shields, and (perhaps unusually) a docking computer based on a Cray laptop from Tadpole Incorporated.

All of these components are standard fittings aboard the Communist Hegemony's 'Herald' class military interceptors, however, and many within the shipping industry point to this - and other features of the Llama's overall specifications - as evidence that Tsierk Letaneya are operating a subsidised industry. This does not stop many pilots from cashing-in on the Llama's undeniable qualities as a small, agile trader and lightweight fighter craft.