So, you've got yourself a ship, but how exactly did you get it? Maybe you took a loan to buy it before the game started. This OXP will create a loan debt you have to pay off, when you start a new game. Yupp. This OXP will make the game a bit harder, nothing else.

While in the Vanilla game & Classic Elite your Cobra Mk.3 is a free graduation gift worth 150,000₢ (and in Frontier it was a gift from your grandfather), real life does not always work like that!

This oxp creates the Lave First Finance Corp, which lent you the money to buy your ship. You have a choice of repayment terms (based on either time or dockings), and this oxp takes it from there. You can repay more, there are issues with late payments, etc., etc. 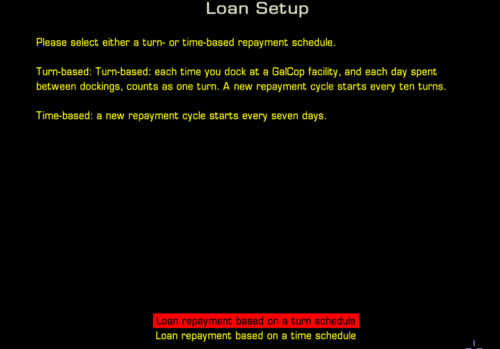 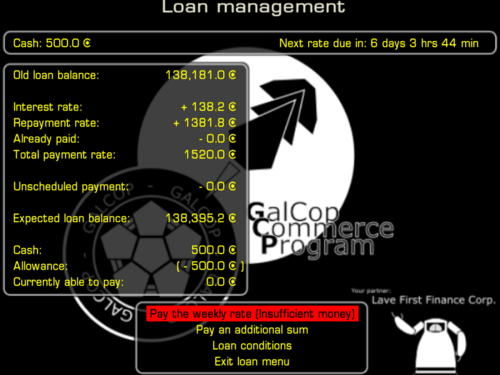 My thanks go to:

phkb. His $padTextRight in "StationDockControl_Interface" from "Station Dock Control" OXP was a big help in improving the menu. I used a few very important lines of code in _formatLineToList.
Disembodied for proof-reading most texts.
Norby and Cody for pitching their name ideas, that led to the name of this OXP.

If it breaks and isn't repaired by me within quite some time, feel free the recreate a repaired version. (Please check beforehand, if somebody else already did this and his/her version isn't working at this point either. Give them credit too, when due!)

Start your game with a massive loan!