The Fireball has been developed with versatility in mind. This multi-functional vessel is able to offer a combination of cargo carrying capacity and passenger transport capabilities whilst retaining above average combat characteristics.

Produced at the shipyards of The GalTech Industries Corporation in the Ceesxe, Gerete and Edle systems the ship has quickly established itself as a commercial success.

Though the standard model is offered with a basic level of equipment the ‘future-proof’ design approach caters for a full range of additional upgrades.

It is however the hi-tech escape module, shown below, which differentiates this ship from many others. Rather than providing the option to fit the ship with an escape pod and hope for a safe return to the nearest station the front section of the main ship, nicknamed the Junior, is automatically jettisoned just before the point of destruction.

The Junior, rather than being a slow unarmed pod, features front and rear lasers along with a respectable turn of speed and manoeuvrability. This may not be sufficient to outgun most attacking pirates but is intended to provide the ship’s crew with a much increased chance of survival.

The escape module from Fireball XL5 can be seen below. 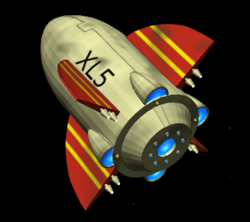 The ship is available as a player craft and also as NPC trader, pirate, hunter and police vessels. Both the pirate and police variants have their own textures.

All NPC ships can, in addition to the standard equipment listed above, be equipped with a range of upgrades.

The police version however is an upgraded model produced exclusively for GalCop by the GalTech Industries Corporation. With an upgraded power system police vessels are capable of greater speed, have an improved recharge rate, stronger shields and an upgraded laser system. Police craft also have substantially more equipment fitted as standard.

Unzip the file, and then move the folder "Fireball_V1.01.oxp " to the AddOns directory of your Oolite installation. Then start the game up and the ships should be added.

V1.00 – Thanks go to Gerry and Sylvia Anderson who produced the original 1962 TV series in association with ATV and ITC Entertainment.

This OXP fixes the use of CARGO_RANDOM in the cargo_type field of the ship's shipdata definition. Such use made the Oolite populator consider the ship a cargo pod. In Fireball's case, it fixes the texture name used in the model: some lines in the model file referenced a non-existent texture file. It's done through a shipdata-overrides since the original OXP license doesn't allow direct modification and update of the original OXP. This work (for all it's worth) is licensed with CC-BY-NC-SA 4.0 (https://creativecommons.org/licenses/by-nc-sa/4.0/).

Fireball and Fireball Fix are both downloadable through the in-game Expansions Manager.